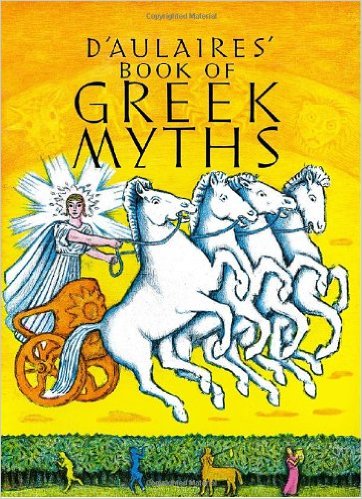 I have always been fascinated by Greek myths. There is something about them right – from their Gods and Goddesses to also the most obvious heroes and monsters – something so incestuous (which is how we would think) about them to not be involved in their myths. And it is not only that aspect that fascinates me, it is the entire gamut – right from how the universe was created according to these myths to how Zeus’s insecurity when it comes to ruling the world or the universe as it may to all the Gods and Goddesses and their quirks and eccentricities.

At the same time, it isn’t easy to read Greek myths – not the version of Robert Graves – well not immediately and with the Percy Jackson series doing the rounds – sometimes you don’t even know which God is God of what and the other – so you have to start somewhere, right? For me, the best place to start was technically a children’s book of Greek myths and let me tell you that I also recommend it to every adult who wants to use it as a primer, so to say.

“D’Aulaires’ Book of Greek Myths” has been in print for more than forty years now and that says a lot about the book. The artwork and the stories both are as enthralling as ever – I know I fell in love with this book for sure – I mean who couldn’t and who wouldn’t? The d’Aulaires make Greek myths so easy with their simple writing and telling of those myths – it may seem to be for younger ears but to me it is for everyone. A must read for those interested in Greek myths.