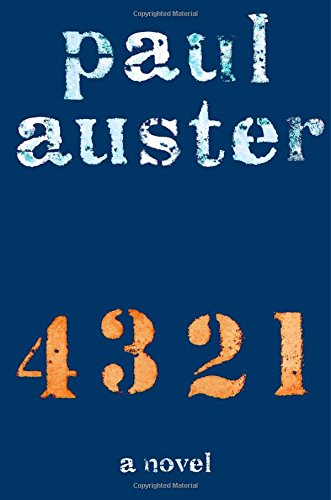 I started reading Auster in 2000 I think. It has been 17 years and time sure does fly. I remember how I felt when I finished reading my first Auster – it was The New York Trilogy and I was a convert. I wanted to shout out loud from every rooftop and tell people to read this book. I wanted more people to read him. I wanted more readers to understand his worlds. Let me also tell you that reading Paul Auster isn’t easy. Why do people read him then? Well, it is only because of how he writes. I can’t think of any other writer who writes like him. Not a single one comes to mind.

Now coming to the review of this book. While I was reading “4 3 2 1”, I knew this would be difficult. It is not going to be easy to talk about this book – because there is so much to talk about. I mean I could go on and on and on but I shall keep it short and simple. “4 3 2 1” to me was a coming-of-age book really – but with a twist, as all his books are. It is 880 pages long and that takes a lot from a reader, but once you dive into it, you are hooked.

“4 3 2 1” is about four different lives of one person – Ferguson and how all our lives play out. The intentions of the writer are huge, sprawling even – to take this concept and turn it into an epic saga, so to speak. I can only imagine what the editing must’ve been like. Four lives run parallel and Ferguson is living in all four worlds. Four people who are identical, but different, same set of parents, same bodies and same genetic make-up, but each living in different houses, different towns with his own set of situations. That is the beauty of this book – the way Auster builds these worlds and you see some similarities but these are just few and that’s where it ends and begins all over again.

When you begin the book though, be prepared to be a little confused where the plot is concerned, however do not let that deter you. Please go beyond fifty pages and you will see the magic of Auster’s writing unravel itself. The choices of each Ferguson are different and you will notice that as you move along – it is the story of the 20th century – starting from March 3, 1947 when all Fergusons are born and carrying through the end and how each Ferguson’s life turns out.

I love this book by Auster the most. His writing is stunning and to be the ardent reader, what was most refreshing was that I could not compare it to any of his other books. The journey of each Ferguson is moving, extraordinary even in the most ordinary circumstances and full of emotion as worlds are navigated back and forth from. “4 3 2 1” is an experience not to be missed. 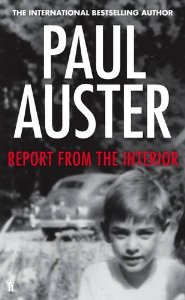 I have never read anything like this. I had said that about Winter Journal some time ago. Now I say it about Report from the Interior, written by the same author. “Report from the Interior” is quite a deceptive title and yet only apt when you start reading the book and getting to know more about the content and what it is about. There are very few books that I can reread and this one is definitely one of them which I will go back to sometime. Perhaps, this year itself.

“Report from the Interior” is about childhood. It is about Auster’s childhood but it could be about anyone’s childhood to be honest. He encounters the outer world with the experiences of his interior self and that is the beauty with which he documents it in this book. He speaks of his childhood most fondly at times and sometimes as matter-of-fact as it can get. From his view of the man-in-the-moon to cowboys to the magic of movies to war, he does not skip any topic of his growing-up years.

What is interesting is how the book emerges – how the stream of consciousness takes place as Paul the child grows up and starts noticing and making sense of life to some extent. The writing as usual is impeccable. There is not a single sentence which is out of place. Not a single word which should not have been there. The final piece of the book is told in pictures – of everything, almost everything he has written, linking memories – piece by piece and trying to make them perfect.

“Report from the Interior” can be read by anyone and everyone can connect with it. The idea of so-called, “growing-up” with what was and what is to come is identified by everyone. We have all lived through and experienced it. This book just makes you realize it, page by page. A wondrous read for the winter. A must read I would say.

Reading a Paul Auster novel is something like listening to a well-orchestrated, multi-layered musical composition where certain melodies and motifs recur with substantial elaboration and variation. He is one of our very best writers and his newest, Sunset Park, like many of his books, reflects back to us a great deal about how we live today. It is “up-to-the-moment” current, the protagonist, Miles Heller, being employed by a South Florida realty company (for part of the novel) as a “trash-out” worker who cleans out repossessed homes that are usually left in awful shape by their former inhabitants. Miles has a somewhat fetishistic compulsion to photograph the forgotten possessions, the abandoned things that have been left behind, and his large collection of digital photos of these objects comprise one of the many lists of contemporary artifacts that Auster constructs throughout the book. It includes pictures of “books, shoes, and oil paintings, pianos and toasters, dolls, tea sets and dirty socks, televisions and board games, party dresses and tennis racquets, sofas, silk lingerie, caulking guns, thumbtacks, plastic action figures, tubes of lipstick, rifles, discolored mattresses, knives and forks, poker chips, a stamp collection, and a dead canary lying at the bottom of its cage.”

Sunset Park is a different type of story, and in some ways it felt more like an intense character study. Its central character is Miles Heller, age 28, an intelligent, but directionless, Brown University dropout, who has been estranged from his family for a number of years. Miles has been harboring guilt over his part in an accident which took the life of his step-brother, Bobby, and which has torn his family apart. Miles father owns a struggling book publishing company in New York, his step-mother is an English professor, and his mother, an actress in the city. In Florida, Miles has been getting by odd jobs in Florida cleaning up foreclosed homes during the housing crisis, while trying to keep his relationship with Pilar, a quiet under-aged teenager.

Soon after tempers flare with the family of his girlfriend, Miles hears from his old friend, Bing Nathan in New York. Miles boards a bus and heads back to Brooklyn. Bing is a man who detests technology and runs a shop called “The Hospital of Broken Things”, where forgotten things of the past, like broken manual typewriters, old radios etc. get repaired. When Bing invites Miles to become a squatter in an empty apartment in the Sunset park section of Brooklyn, he joins him along with two women: Alice Bergstrom, who works part-time while working on her dissertation, and Ellen Brice, a unsuccessful real-estate agent, obsessed with the human body, who wants to be an artist.

Art and Literature bind Auster’s characters into a subset of Americana adrift and in search of moorings. As each character — mother, father, son, underage lover, coconspirator, childhood paramour — moves through dilemmas and confrontations — questions of self worth, gender, sexuality, ambition, procreation, death, global politics, and so on — to arrive at moments of clarity, compassion, self awareness and self liberation, armed for the good fight in the face of whatever the future might deliver next.

Auster loosely integrates these individual narratives into a fluid mythic context: Hollywood, in the form of William Wyler’s sentimental 1946 “The Best Years of Our Lives” which follows three World War II veterans return home to discover that they and their families (not to mention their nation 60 years later) have been irreparably changed. (Jung’s myth of the returning hero gone awry.) Auster’s contemporary characters engage the film and live out post-war angst, and post-cold war decline, into a state of lingering ennui at the end of empire today.

There’s a deeper mythology at work in Sunset Park, the exhausted spiritual state of existential reality as Samuel Beckett explored it, before the rest of us were even “born into it”. Auster’s lead character’s estranged mother, for example, is a successful aging film actress returned to the city to appear in the role of her career as Winnie in a new production of Beckett’s stark and challenging “Happy Days.” Sunset Park’s mythic context sifts through the last half century from the failed returning hero, into Beckett’s post-apocalyptic landscape of endless contemplation and anxiety, armed with nothing but logic, cunning, and language. Another contextual level is the everyday mythology of baseball heroes, discussed endlessly between generations, as well as food and popular celebrity which provide connective tissue to hold contemporary culture at least conversationally in place.

Like, “The Hospital for Broken Things”, the characters in Sunset Part are a collection of “broken souls” struggling to find a place in this world, haunted in some way by their damaged past. At times the story seemed conveniently, contrived, and the narrative without direction, yet the characters and their issues seemed very genuine. I thought the contemporary post-recession time frame was perfect as well. In the end, some things were left unresolved, leaving me with unanswered questions, and curious as to whether this was unintentional or whether Auster has a sequel in the works.

Sunset Park is a coming-of-age story. It shows young men and women struggling to cope with and grow up from the wounds of early life, to take a hint from one of the novel’s early passages. For though Miles is its main protagonist, the story revolves from one of the squat’s inhabitants to another and, skipping a difficult-to-bridge gap, to the generation above. But Auster’s latest novel also is about recession America. Waste and reclamation are everywhere present, from Miles’s job at the beginning of the story, to Bing’s store for repairing broken typewriters and record-players, to the house in Sunset Park itself. The constant need for money, the need to deal with bare essentials, are of course favourite Auster tricks to highlight, by contrast, his characters’ dilemmas.

But this novel is also the closest Auster has come to making a statement about America in the present, rather than in the abstract sense. Sunset Park is an American novel as well as the more typical metaphysical rumination. And this makes it something new to the Auster collection. Even if old themes such as homelessness (Moon Palace, City of Glass, The Music of Chance) remain present in Sunset Park, its cautious optimism, its preparedness to see light as well as dark, its greater realism make it something different. This is both a classic Auster novel and a new, intriguing departure.