So I have made a decision after weighing all the pros and cons, after giving it too much thought, after being aware that I might lose some friends and yet the decision has been made: I shall not lend books anymore. Why? Because people who borrow books must learn how to return them after reading, which sadly enough they don’t. I do not think I have it in me to lend my precious ones again to anyone, this includes my boyfriend as well.

I am done with people who borrow books and do not return them. I am done with the likes of those as well who borrow and return the book not in the condition that you lent it to begin with. Why do people do this? I will never know. I once had this friend (point to be noted that he is being referred to in the past tense) whose name is SaiVijay. I met him in Hyderabad and made the mistake of lending him my precious babies one of which was a personally signed book by an author whose name I forget. The point being: He never bothered to return my books. I was livid. I cut all ties.

Another one of these in the line was an ex-trainee from IBM Daksh whose name I shall not mention here, who had the gall to borrow almost a dozen of my books and yes you are right. She did not return them. I hounded her. I chased her. Without avail. There are no two ways about this one: Books are not meant to be lent. I lent books at one time thinking that everyone had the right to read and may be it would be great if I was the catalyst. Yes everyone does have the right to read, however one should not forget to return books. That is fair and sqaure. I have learnt my lessons. Two friends (or rather acquaintances) were enough to make me realize. Never again.

It’s the temperature at which paper burns said the first page of the book and I knew it having read it earlier, and yet I chose this book to be re-read. It has only instilled my faith further in the power of words and what can they do. Writers such as Bradbury and Orwell who have written on the totalitarian society and how a group of people stand and fight it, may be somewhere at some point done the same and that is what which amazes me.

I first read this novella (190 pages and yes I am aware that the technical definition would not allow it to be classified it as a novella, however I chose to call it that) when I was 16 and was enthralled by it. Guy Montag’s transformation from a fireman who burns books and takes pleasure in it to the one who savors the written word and wants to save books and thereby his soul is brilliant. Bradbury did not dream the future when he wrote Fahrenheit 451, the future actually was here. Right now. Look around you. Aren’t we burning books by banning them anyway? I am sure in certain parts of the world people are not at liberty to read (Afghanistan being one such place). I wonder how my life would be if someone were to barge in my house and burn down my books. I would either kill myself or the person in the bargain. It would be the latter in all probability. 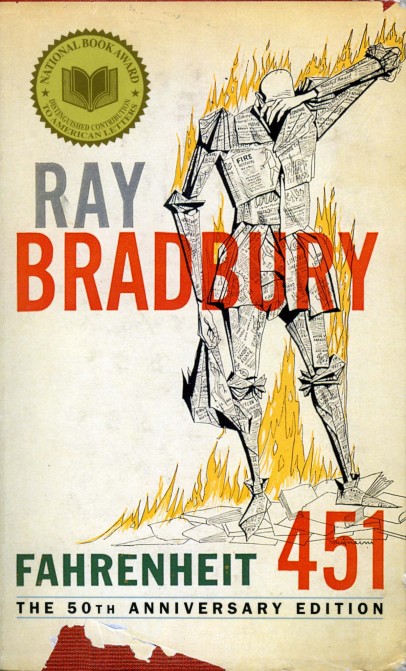 What I loved about the book this time, is that I understood the layers involved, which I hadn’t earlier. It is not only about book censorship, it is about censorship period. The part in the book when Guy is raving mad at a bunch of women who think nothing beyond their husbands and “families” who can now be viewed on huge TV Screens and how he reads poetry to them and one of the women starts crying. I would like to believe that the tears were for a lost tradition amongst them. That of reading. The joy of thinking. The freedom to speak without editing a word.

I can say one thing though – Books can never be extinct. Try as you might. Try hard if you will. Just try.

There are ways in which a writer can borrow a story and yet it will not be his/her’s and there are ways in which a writer borrows a story and it completely becomes her’s and there is no looking back then. This is what Ms. Atwood does with “The Penelopiad”. The story is known to all – that of Odysseus and Penelope and how she had to wait for the longest time for his return from the Trojan War.

While I found Homer’s tale to be nerve-wrenchingly boring (apologies though that is just not what I intend to ever go back to), Atwood’s tale is definitely from Penelope’s perspective. More so from the 12 maids’ minds and eyes who Odysseus and his son hang mercilessly when he returns. Penelope and her maids are dead and they are telling the tale from the underworld.

What I loved about this short piece of reconstructed Myth is the way it is written. It reads almost like a poem in bits and pieces (of the 12 maids’ lives and what they had to endure) and it does not bore you for a minute. It took me barely a day to finish it and I went back to it purely because in my mind I also compared it to a portion of “The Ramayana” where Ram doubts Sita’s purity while she was kidnapped by Ravan and was a prisoner at his palace.

My favourite part hands down in the book has to be the one where both Odysseus and Penelope meet after years and are aware that both have not been faithful to the other and yet pretend as though nothing changed. As though love survived it all. There are a lot of portions which I have loved while reading this book. However, one of them has also been the way Margaret Atwood set it out to be a farce and that’s exactly what it has become. A brilliant farce on one of the greatest myths ever! Please read it! Do yourself a favour.