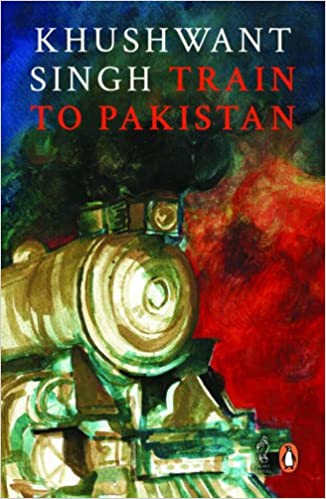 This was my third reading of Train to Pakistan, and every time I read it, there is an ache that seems to have gone but hasn’t. I grew up hearing some stories of the Partition from my grandparents, and at the end of each story, I would see vacant eyes, eyes that said a lot and yet did not want to go beyond what was said. The memory of it all would haunt them all their lives.

Train to Pakistan is perhaps the first book that comes to most minds when speaking of the partition of the country. If not the first, then at least second. The starkness, honesty, and empathy of the novel has spread over decades in terms of being relevant (sadly) and continues to do so.

The plot is about a fictional village named Mano Majra and its residents (Muslim and Sikh), and how they are caught up in the turmoil of Partition, how it affects their relationships and lives. It all starts when a train filled with the dead bodies of Sikhs and Hindus arrive in Mano Majra. Singh gives us this but doesn’t make it the centrepiece of the novel.

Train to Pakistan to me is all about human nature, its relation to religion, its connection with the concept of life and death, and how suddenly it is either each man for his own or coming together of people in times of crisis. What I loved the most about this novel (even in the third read) was that Singh never loses his grip on empathy. There is this sense of brotherhood, of community, and yet in the face of the larger event, people seem helpless. Or are they?

Train to Pakistan was read by me as a part of my Partition Reads Project, of one book on the partition to be read every month. I believe that no matter how much it hurts to read such literature, we can never forget what happened, and in that process we heal – we remember and not forget that we need to be better humans – every single time. 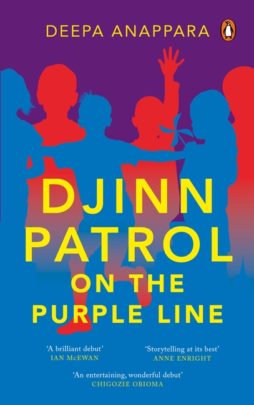 Djinn Patrol on the Purple Line is a joy to read – the prose I mean. The story is dark, and will bring you down, but will also make you smile and maybe make you hopeful about the world around us. Djinn Patrol on the Purple Line by Deepa Anappara is a revelation – even revealing what you already know but ignore as you live your life on a daily basis.

The book is about children that are disappearing from a basti (slum) they live in. Jai, a nine-year-old kid decides to find these children, with the help of his friends, Pari and Faiz. He is influenced by the true crime show Police Patrol and is confident that his detection skills will make everything alright. He also recruits a dog for this task and names him Samosa. The story then takes off with more children disappearing, their detective work, and what it ultimately leads to.

This is the thread-bare plot of the book. Of course, there is a lot more that goes on. Anappara doesn’t name the city in which the Purple Metro Line runs but you get a sense of it. The hi-fi buildings next to the basti, the large mountain of garbage, the walls built to separate the rich and the poor, and the aspirations that continue to soar.

With this book, she builds a world that is known to us and yet remains unknown. Is it because we don’t want to see how lives are lived there? Is it because we don’t wish to be involved in lives other than ours? There was a lot of morality play at work while I was reading Djinn Patrol on the Purple Line and rightly so. Anappara wants you to question it all – the intent, the society we live in, the rules we follow or make, the ones that we don’t because we are scared, and lives that don’t get the same or equal opportunities such as ours, no matter how woke we are.

A lot is communicated through the book and a lot which readers have to infer. The book also has been published at a time when the Indian democracy is at the mercy of political parties who have the agenda of dividing and ruling basis religion. It comes at a time of Delhi riots, where there is clearly a pogrom at play – that of eliminating Muslims. A major part of the book also speaks of Hindu-Muslim divide in the wake of disappearing children.

There are three sections in the book, and each starts with “This Story Will Save Your Life” chapter which is about the grim reality of the underbelly (so to say) and yet sounds so assuring. Djinn Patrol is narrated by Jai – the language is English, sprinkled with Hindi throughout, which is the lifeline of the book. There is no need for translation of those words because they take the form of emotion. Anappara doesn’t spell all for the reader, she doesn’t want to explain it all – it is left to the reader to decipher – the situations, the language, and hence draw out the meaning.

Jai, Pari, and Faiz are endearing, earnest, and want to live a secure life and nothing more. It seemed to me that Anappara wanted nothing more for them but had to say what she had to. The children are lost, the djinns are legendary, the class divide is real, the rubbish pile dividing them quite literally is as real as it can get, and in all of this is the slum, which is home. The prose brings it all out – nosy neighbours, dangerous children, even more dangerous adults, a trip to the red-light district, the sense of dread, the claustrophobia as you are reading a scene taking place in small spaces, the smells – of shit, oil, ginger and cardamom tea, and the ever-hanging smog – the smog that doesn’t seem to lift like their misfortune.

Djinn Patrol is a coming-of-age story, a thriller, a literary story, a story of imagination and fantasy, a story that is both linear and nonlinear, and a story that is tough with a heart that’s as soft as cotton. Djinn Patrol on the Purple Line is a book that will stay for long and hopefully will make you pray for the children of the world. 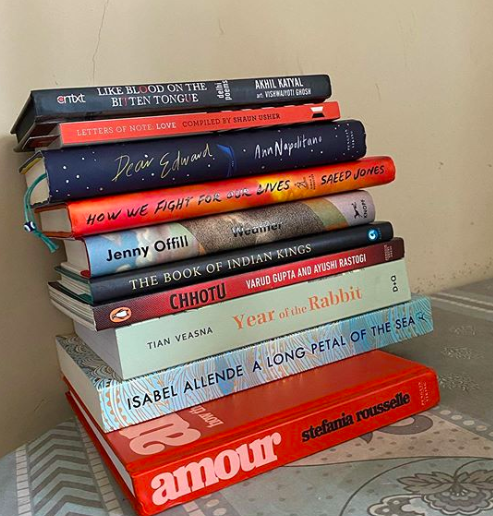 Wanted to read more than I read in January 2020. Ended up reading one book less. So, February ended with 12 books read. 10 seen here as two are lent to other people.
.
Here’s hoping March 2020 will be kinder and more will be read, thanks to the International Booker 2020 shadow panel and the Women’s Prize for Fiction Longlist 2020. February was great with a book about love, of Delhi and its poems, of Allende and the Spanish Civil War, of a graphic novel about the Khmer Rouge, of Offill’s take on climate change with a story seeped in domesticity of life, of love and loss in Dear Edward and more. .
.
Here is the list read with my ratings:

1. Amour by Stefania Rousselle (5)
2. A long petal of the sea by Isabel Allende. Translated from the Spanish by Nick Caistor and Amanda Hopkinson (5)
3. Year of the Rabbit by Tian Veasna. Translated from the French by Helge Dascher (5)
4. Like Blood on the Bitten Tongue by Akhil Katyal. Illustrations by Vishwajyoti Ghosh.
5. Chhotu by Varud Gupta and Ayushi Rastogi. (3)
6. The book of Indian kings (4)
7. Weather by Jenny Offill (5)
8. How we fight for our lives by Saeed Jones (5)
9. Snow, Dog, Foot by Claudio Morandini. Translated from the Italian by J. Ockenden (4)
10. Dear Edward by Ann Napolitano (5)
11. Letters of Note: Love. Compiled by Shaun Usher (4)
12. Citizen: An American Lyric by Claudia Rankine (5) .
.
So, this is my list of February 2020 reads. What about yours? 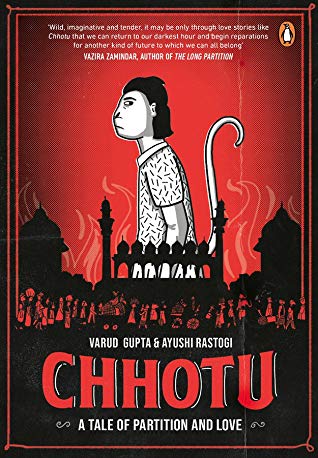 There are times when you somehow expect so much from a book that even if it disappoints you a little, you tend to take it personally. I understand that sentiment, but do not go by that alone. Look at the book in its totality. Chhotu for sure didn’t live up to my expectations but I loved the premise of it being set in the time of Partition and added to that the angle of love, and more than anything else, taking a page of Maus and reimagining characters as animals. Full points on also Indianizing it.

The book is set in Chandni Chowk and that to a very large extent got me all excited about it, just that I couldn’t empathise or relate to any character. I could see where the story was going. I know most of it. We have heard the same story from our grandparents and what they had to go through during the Partition in one way or the other – of strife, of loss, of not knowing what is going to happen next to them in a country now divided. I saw all of this coming and yet I somehow couldn’t empathise with what was going on.

I was expecting a lot. I wanted more to happen but it didn’t. I liked how the book was structured with famous Hindi song titles as the chapter names and that worked given what was happening in the chapter. The concept is good and would definitely recommend it to people who want to start reading about the Partition. A very good place to start from.