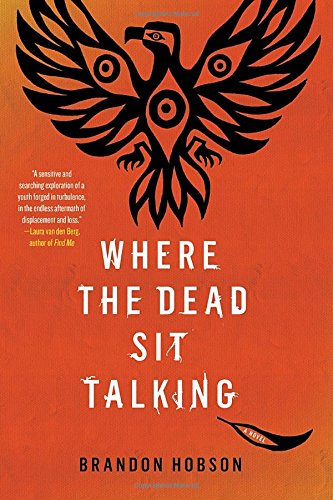 Coming of age stories are always appealing to me. Somewhere or the other, they spring up and I read them and get all nostalgic about growing-up too soon or growing-up and not realizing that it happened. “Where the Dead Sit Talking” is one such book. Also, might I add here that coming-of-age stories could also take place at a time when you are also an adult, however, this one is set on the brink of adolescence and is illuminating and intensely psychological at the same time.

“Where the Dead Sit Talking” is not a regular coming of age book. It is raw, jagged at the edges and tackles some major issues such as child abuse, abandonment, alcoholism and neglect without any pretense. Also, to some extent it draws on the flaws of the American foster care system (I’ve always wondered how efficient that is, but I guess there is another book for that at another time).

The book is set in the late ‘80’s, Sequoyah a fifteen-year-old, is the narrator of the book. He has moved from one foster home to another (his mother is serving jail time), till he seems to settle with this one family in Little Crow and that’s where the story begins. He forms an instant connection with one of the other foster children there – Rosemary and that forms the crux of the book.

The thing about this book is that it doesn’t sugar coat brutality. It is there for all to read and experience, no matter if you are cringing or don’t want to turn another page (which you wouldn’t want to, because this book is that good), read you must.

Hobson’s characters are so flawed and waiting for redemption so long, that you start hoping for them. Brandon’s prose is simple and yet striking, it is layered and easy to read, which to me are fantastic about very few books. Also, the Native-American narrative is so needed (was always needed) and comes out powerfully in the book. At the heart of it though, “Where the Dead Sit Talking” is about humans – battered, lonely, the ones who do things and then regret and sometimes there is no regret as well. It is a book waiting to share its secrets with you, it is more than just a coming-of-age book – the one that will move and haunt you in equal measure.