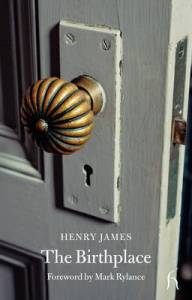 If there is one novelist whose entire body of work I am eager to read, it would but definitely have to be Henry James. Henry James as a writer is something else and I feel his works are either loved or hated. You cannot be in-between when it comes to Mr. James’ writing. Either you like it or you do not.

Henry James wrote of an era and time when manners were the key to discriminating in societies and classes. He wrote making fun of the culture and as one would say, provided the much needed, “black comedy”. His writing was unlike any of his contemporaries and maybe that’s why it turned out to be this different and sometimes difficult to read. Not everyone can get used to his style – the sometimes so called big choice of words and then others simply told with the much needed twist can be quite a challenging task for a reader.

In the two short stories in this book, “The Birthplace”, one can clearly see James’ style shining through. The title story is of a family moving in to the birthplace of their nation’s literary hero to become live-in guardians of a house, which reveals itself to be sinister in more than one way, thus diminishing their view and opinion of everything around them.

The story had the sinister feel to it for sure and more than that it had reactions from every character in the story that added to its presence. The second story, “The Private Life”, one of James’ lesser known works centers around the importance of an author in the literary grand scheme of things keeping in mind literary criticism and arts in general.

I think the second story must have been very close to Henry James’ heart given the context and the way it is written. Also it is my favourite now after, “The Spoils of Poynton”, which I think is his best work (but that’s just my opinion). Read Henry James if you haven’t read him before. He has a way with words like no other and an author you will not regret reading.

Buy The Birthplace from Flipkart.com 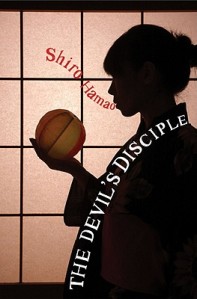 Most Japanese fiction has an element of suicide attached to it and almost every Japanese writer has explored it. Besides suicide, their favourite topic is Death and it is with this topic, The Devil’s Disciple begins.
The Devil’s Disciple written by Shiro Hamao is a decadent, quirky, druggy and kinky sort of a book. The Devil’s Disciple published by Hesperus Press consists of two short novels – the title novel and “Did He Kill Them?”. Both these novels feature pulp fiction crime like no other Japanese crime books I’ve read in the past.

The Devil’s Disciple is a story of a man called Eizo charged with and facing a trial for murder. The story starts with Eizo writing a letter to his once school friend, mentor and lover Tsuchida Hachiro. The two met in their school days and Eizo quickly fell under the spell of Tsuchida. Eizo sets forth his case in the letter, telling him that although someone did die, he isn’t the cause of it and neither is it murder. What unravels in the letter is also that Eizo blames Tsuchida for his life and philosophy, hence generating the title of the story.

The second story, “Did He Kill Them?” is a twisted and gory tale of a couple killed in their own home. There is only one possible suspect on the scene – Otera Ichiro, who is arrested for the crime and refuses to speak about it, even though he is sentenced to death. After the death of the suspect, the barrister finds a manuscript he wrote in jail, explaining what really happened and why he kept his silence.

I don’t think a lot has been written in this genre, Japanese Crime Fiction that is, however I consider myself lucky to have read these two stories. They are dark and build the atmosphere to perfection. The psychological elements are in place and they do depress you for a while. The translation is done to the last detail, which is required in a book like this. Hamao’s writing is not only powerful, but also contemplative. Besides this, I am only too happy that Hesperus Press has published this work. I would recommend this book to all lovers of crime fiction.

Buy The Devil’s Disciple from Flipkart.com 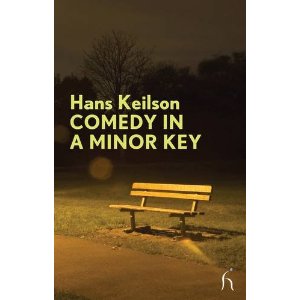 I believe in the cliché “Brevity is the soul of wit.” Too often over the years, a book has made me feel like the author was being paid by the word. I appreciate books whose author doesn’t waste words; Comedy in a Minor Key is a perfect example to me of how succinctness doesn’t have to compromise the story, and in fact, how succinctness can work in the favor of a story’s overall construct.

The book tells the story of a Dutch couple (Wim and Marie) during WWII who are providing secret housing for a middle-aged Jewish man (Nico), but who then must find a way to dispose of his body when he dies of pneumonia in their care. Even though the book was written in 1947, the book spends no unnecessary time explaining the context of their dilemma and assumes the reader knows what happened in the Netherlands during WWII, and what the inherent dangers of their predicament were.

Barely 135 pages, Comedy in a Minor Key is a subtle, compassionate, richly human story with more complexity and mystery than one would think was possible to sneak into such a slim, matter of fact volume. “Wim slowly regained his usual composure. Even if he was the younger man here, he was still the host, and that brought with it various responsibilities. He felt that the other man had understood precisely the reasons for Wim’s initial discomfort and that he had made an effort to dispel it, even though he found himself in an even less comfortable situation. Wim offered him a cigarette and said, as he lit the match, ‘My wife and I are happy we can do something for you.’” These small true moments reveal the character of people who do the right thing in extreme circumstances, yet maintain the ambiguity and complexity of character and motive that are universal in circumstances great and small, profound and banal.

As a reader I found the story contained poignant passages which serve as displays of the simple kindness and generosity of humans shown towards others facing adversity and torment. There is something very spiritually renewing about this book. I must mention that I failed to see the comedy or wit as the title would lend, being that it would be extremely difficult to find anything humorous about this dark period in world history. Would I read it again? Most definitely.

You can buy the book here on Flipkart