To be honest, I had gone blind into this book. I had not read the synopsis or any review online. Nothing. I knew nothing about the book and just went on an adventure with it. Take me where you will, I had almost said and saw through that to the very end.

Faludi’s book to put it simply is about her father and identity. However, it isn’t as simple as it sounds. Susan’s father had left her when she was young. She then set off to investigate him in the summer of 2004 – in the process of discovering and knowing her father, she began understanding her roots and history – Jewish history at that.

Susan found out that her seventy-six year old father – now living in Hungary had undergone sex reassignment surgery. This then led to the questions of identity and gender in the modern world, as seen and observed by her. How could she come to terms with a new parent? A parent who was no longer a man, but a woman? Did it make sense at all? Should it make any sense in this world? At the same time, she had always known her father to be violent. He was a photographer (hence the title and more layers to it which you will figure as you read the book)and the reference to images and the shifting of them is another thing that will leave you spellbound in this book.

The book traverses between the present and past beautifully. Susan’s writing takes you to dark corners of the human heart and soul – when she speaks of politics, she integrates it with the personal and that lends itself so well again to the “question of identity”. Can you escape it? Can you so easily invent another one for yourself? Is it really that simple?

What I also loved is that Susan talked of the trans-gender movement (being a gay man, and it falling under the umbrella of LGBTQIA, I couldn’t help but wonder about it, which led me doing my own research on it) and not only that, the way she speaks of universal father-daughter relationships and how she doesn’t know where she stands in that equation anymore. Through her writing, you can see her struggle to find her father beneath the person he has now become.

“In the Darkroom” is emotional for sure but above all it is a book of such intricate details of relationships – that are strong and fragile and need a voice of their own, which Faludi lends hers to beautifully.

I had chanced upon this graphic novel, just by surfing, as I chance upon most of my reads. I read stuff on the internet and then pick and choose by reads. Like most reads that I come across this way and read it this year – the first book of 2016 and what a way to kick-start the year!

“The Arab of the Future” is a graphic memoir of Riad Sattouf and is the first in the two part series. It is about his childhood spent in Libya, France and Syria – and how he and his family kept shuffling between these three places. It is about the confusion that Riad goes through as a child, given the different cultures and perspectives. It is almost as if it is the miseducation of a child in an Arab world. It is world where little boys defecate on streets, women have no voice, stray dogs are killed with pitchforks and where religion is of supreme importance and you are definitely in for trouble if you aren’t Muslim.

Riad Sattouf, a French-Syrian cartoonist has drawn just more than what seems to be a graphic memoir on the surface. It is a juxtaposition of values and how each culture is and what they stand for. Riad’s Arabic father believes in a lot things that his French born and raised mother does not and in all of this there is Riad, trying to make sense of the worlds he has been thrown into – where his relatives on both sides seem to be very different and act differently as well. He cannot figure what is going on and is forever confused as he makes his way and understands the world a little better. 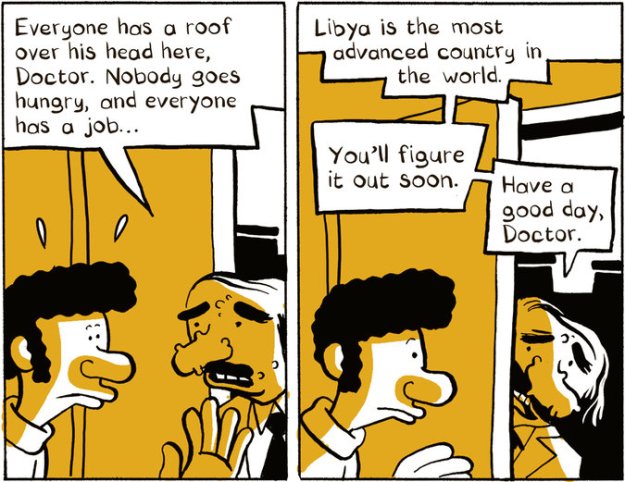 For me while reading this book, a new world opened – that of Sunnis and Shias (though the discussion points about this aspect are few), about Israel and Palestine and what is the conflict all about (again this is briefly touched upon) and how even family members deal with each other sometimes in the most brutal manner.

The graphic memoir is beautifully illustrated with a lot of tongue-in-cheek comments and indications as you go along. It is done in sepia tones, which you get used to as you turn the pages. I was fascinated with how Riad’s education took place right at home amidst his cousins and their fascination for his toys to how religion politics even affect childhood to a very large extent in these areas – may be that is just how it is with them – catch them young and watch them grow.

The book in a graphic form touches on so many issues that it is difficult at a point to treat it as a graphic novel. You wish he had written a non-fiction text which had more details. “The Arab of the Future” also has a sequel to it which I am most eagerly awaiting – it will take some time given that it will be a translation just like this one. To all graphic novel enthusiasts: Do not skip this one. A must read.

The Arab of the Future