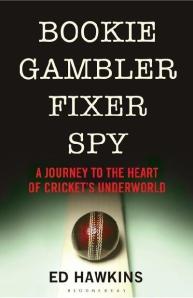 In India, they say, two things are most famous – Bollywood and Cricket. The people who act and the people who play the game are both revered and treated like Gods. The so-called audience for both these art forms (Well sports also is a form of art, isn’t it?) is widespread, not only in India, but I can safely say, even worldwide. I also believe that every art form has its own drawbacks – the casting couch for the film industry and then the very famous “match-fixing” syndrome for the now almost national game, Cricket.

“Bookie Gambler Fixer Spy” by Ed Hawkins explores and uncovers the other side of Cricket – the game that is loved, is looked on from a Devil’s advocate view, baring and maybe even exposing the underworld of the game. Ed Hawkins does it not just from India’s perspective or targeting the sub-continent. He also links the impact to world cricket and how the game changes at various points and of course covering all major tournaments and trophies up for grabs.

I am not a lover of the game. I cannot sit and watch the game of Cricket. That is just my preference. Having said that, this book was an eye-opener to the game and its politics and dynamics. Hawkins spent a lot of time in India. He interacted with the so-called bookies – the men who make millions of dollars per cricket match. Hawkins, being a sports journalist was always aware of what was going on. However, one single tip changed it all and he decided to expose what was going on in the name of the game and that led to the writing of this book.

The book is divided into three parts and each part for me was unique (since I do not follow the game) and shocking in bits and parts. He speaks of the age-old methods used to fix matches and their impact. Hawkins also asks the most pertinent question: Should illegal betting be legalized in the country? There are several points of view as well which are put forth and make for some interesting reading.

Ed Hawkins has written the book almost in the form of a thriller – the pace is racy and not at a single point during the book, was I bored or felt that I should stop reading it. The structure of the book is precise and does not confuse the reader. For someone like me, getting into the book was a little bit of a problem, since I do not follow the game, however for Cricket lovers it will be a breeze. I strongly recommend this book for Cricket lovers to be able to see the other side of the game. Of the darkness that lurks and how it affects the game at almost every level. A great read for a lazy Sunday afternoon.

Buy Bookie Gambler Fixer Spy: A Journey to the Heart of Cricket’s Underworld from Flipkart.com