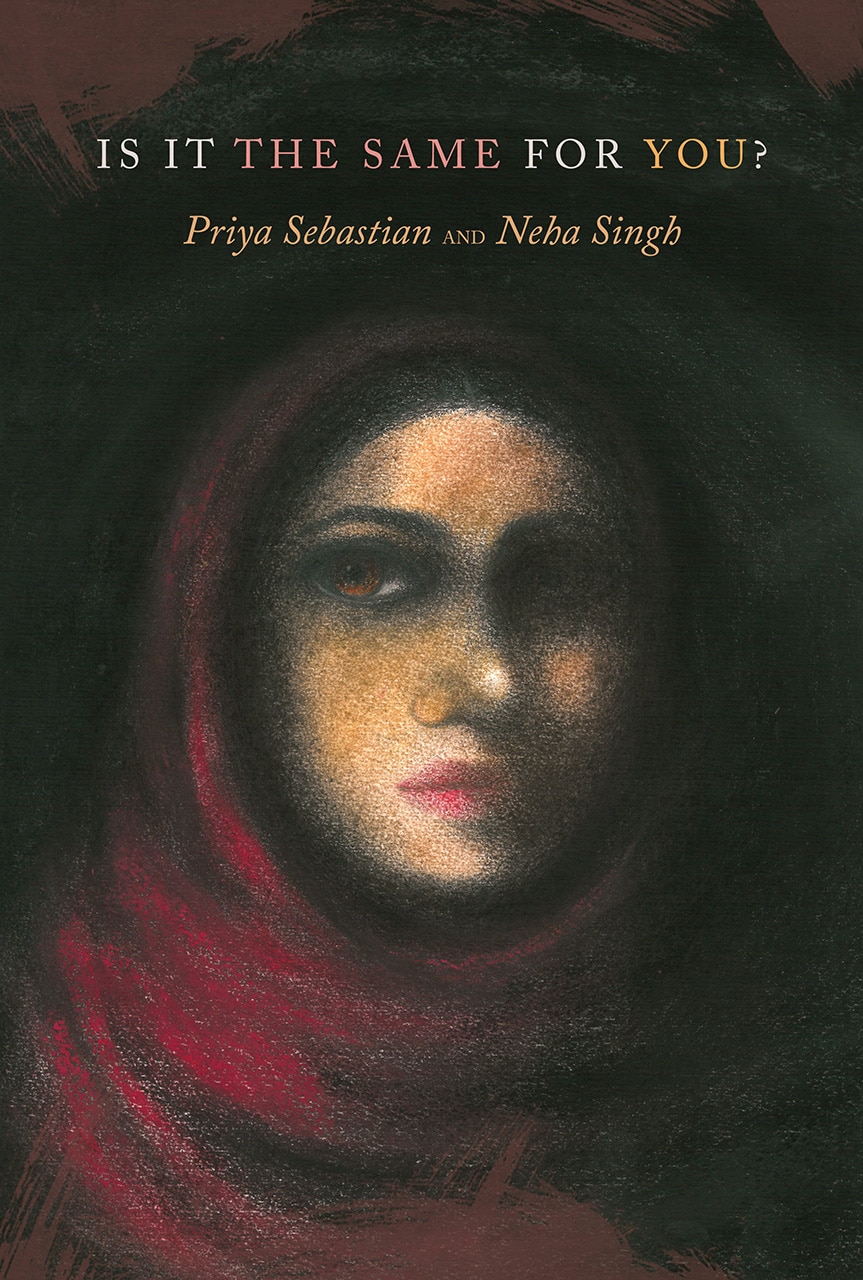 Young girls in conflict zones perhaps face so much more than we know of or will ever know. What do they think? What do they feel? When does childhood end and the reality of being where you are hits you hard? What do governments have to account for then, when innocence is lost way before time? Is it the Same for You in its most raw form asks all these questions, making the reader constantly reflect with every turn of the page.
.
Priya Sebastian and Neha Singh take different moments of a young girl’s life in Kashmir and bring them to fore. Amidst all the conflict (political and religious) and terror, the question remains that is it the same for all young girls out there? How is it when their bodies change? The book looks at shards of life – the ones that are rarely come about – when the not so normal becomes normal, when you get used to what you aren’t supposed to get used to, and life is lived just on the sidelines.
.
Neha Singh’s text coupled with Priya Sebastian’s most stunning illustrations will constantly haunt you. Each page of sparse text is a story with so many layers and so much to see. The girl who takes comfort in the assumption that maybe this is what it is for all girls over the world and who is to say it isn’t? In one form or the other that is. From one conflict zone to the other. From one state of normalcy to the next. Is it the same for you?

Life isn’t easy. Life isn’t easy for those who live on the margins. It isn’t easy when you are surrounded by poverty and bitterness. How do you love when all you have seen is hate? How do you bring yourself to live then? Eve does that. She lives, on her terms. She doesn’t live, she merely survives, day after day, trying to get out. Hoping for a better future, till she doesn’t. You witness her story, her life, and hope and pray that she is redeemed – that others are as well, that at seventeen and perhaps a little older, they deserve better, but you don’t know how the story will turn out, and where will it go.

Eve Out of Her Ruins is set in Troumaron, an impoverish area of Port-Louis, the capital of Mauritius Island. You see what you haven’t seen or thought of Mauritius to be. There is fear, there is violence, there is sexual assault, the air heavy with stench of yearning to get away, of dashed dreams, and broken hopes.

We meet four youngsters – fighting to survive. Eve, the seventeen-year-old that time forgot to nourish, that kindness overlooked, who moves from one man to another, always looking to get out but doesn’t want to. Savita, Eve’s soulmate in a sense, the only one who loves her selflessly. Saad, who is in love with the idea of Eve – who wants to save her and knows that she will never love him back. Clélio, a rebel waiting for life to happen to him, waiting for his brother to call him to France, waiting almost perpetually.

Through these characters Ananda Devi creates a world that is raw, belligerent, sometimes tender, warily poetic, and even forgiving. The world of Troumaron that is exploding at the seams – waiting to burst with energy that will only ruin these four. Ananda Devi’s characters are similar and so dissimilar to each other. In the sense they are all stuck, all perhaps wanting out, and yet don’t even know it. Her writing hits you hard. The poetry and the prose merge beautifully – they make you imagine as you read – the characters became more real than ever, and their emotions became mine.

Eve Out of Her Ruins is a small book with so much to unpack and undo. The lives of people on the margins, the lives they lead forever fluctuating between hope and hopelessness, brought out beautifully by the translator, Jeffrey Zuckerman. I could sense the French, and the Mauritian Creole rolling off my tongue as I attempted to read it when encountered it in the pages. This is a book that is not to be missed. I urge you to read it. Ananda Devi, we need more writing from you. A lot more.