The deal with graphic novels written by Clowes is that there is not one single moment of rest. You cannot keep it aside and mull over what you’ve read till it is over and done with. “Patience” is one such of his graphic novels. It is sci-fi, love, twisted and redemptive in so many ways, that you cannot help but love the writing and the illustrations.

What is it about though?

Before I tell you what this book is about, let me also tell you that this book is highly trippy – the graphics are 80s and fucking (pardon my French) fantastic. I mean, this one for sure has surpassed his earlier works in terms of the visuals. Having said that, Clowes’ books do tend to drift away from the regular – be it the story or the characters’ nature. Patience is definitely no different and on the money every single time.

Clowes explores the themes of loneliness and alienation as he has in most of his other books. What makes Patience so different then? It is also psychedelic and it is a sci-fi love story – which is destructive and tender. Jack’s pregnant wife Patience is killed and this leads to his downfall. He lives in misery for decades till he discovers a way to travel back in time and stop the murder from happening. Once he does travel in the past, he learns a lot about his wife which he wasn’t aware about. How will the book end? What will be the outcome of this story? There is really only one way to find out. Read this book. It is one of those rare gems. 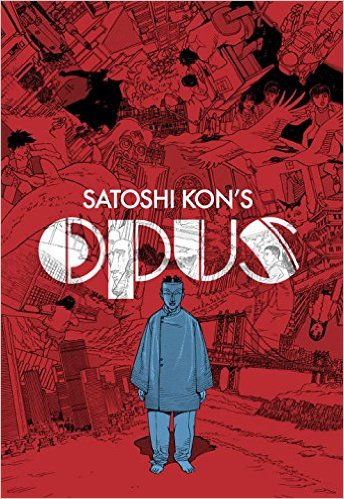 Satoshi Kon died very young. When he was only forty-nine years old. In the course of reading his manga, “Opus” I researched and got to know more about it. I didn’t even know till then that he was a renowned filmmaker. I’m only too glad that I read “Opus” – a little too late, but better late than never.

“Opus” is about worlds that writers create; characters they rule over, plots they devise and how all of them affect each other. The manga is about a manga creator Chikara Nagai and how he is at a deadline to finish his graphic novel Resonance. Lin, his main hero does not want to die. He protests as he tears the last sheet of the manga and runs into the world created by Nagai. Lin wants to protect Satoko who is battling the evil Masque. Masque will stop at nothing. These are characters created by Nagai and he doesn’t want them to have a happy ending, though his editor and everyone else around him wants them to.

Chikara by chance or magic if you please enters his world of Resonance. The characters want to write their own story. Satoko comes to the real world with Chikara and things change drastically – with a lot of thrill page by page for the reader. Let me not say any further now or I will be giving away most of the plot.

Kon’s imagination is magnificent – as is visible through this manga. I haven’t watched his movies, so I really can’t comment on them. Having said that, this manga is brilliant beyond words. The anime has so much character, grace, personality and plot twists and turns that you cannot help but love this one. I wish someone would make a series of it soon. It would be epic.

Wilson is a strange character. I have never encountered someone like Wilson in graphic novels. He is not a happy person and he doesn’t like people. He is a sociopath. He is a loser. He is also not a romantic. He loves his dog. He doesn’t care about his ex-wife (or maybe he does) or for his daughter (maybe he does). All said and done, Wilson isn’t the sort of man you’d hang out with. 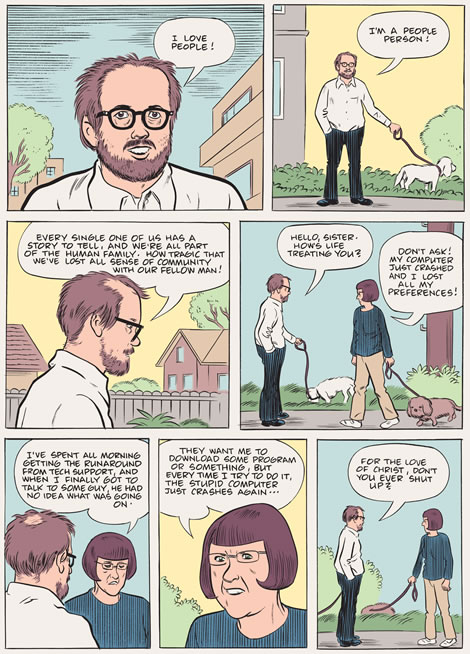 “Wilson” by Daniel Clowes is told in the form of cartoon strips. It is spread over 80 pages in this format and is a delight to read, with every turn of the page. He is an introvert and also an extrovert – basically confused which most of us really are, so it is okay. Daniel Clowes focuses on the ups and downs of one person’s life and surprisingly, there are portions you can very well relate to. My grumpiness for example – I could totally understand when Wilson was not being so nice (which is almost all the time in the book) and that kinda overwhelmed me.

Wilson might also be about the mundane and about loneliness and how each of us deals with it. The pages compliment Wilson’s mood – the colours, sometimes the fonts and the attitude as well. Wilson is a bastard and you can see that – but he has more shades to him than just black and white and that is what makes this graphic novel super interesting. His interactions with others are most unique and funny.

I would highly recommend everyone to read “Wilson” only because it is so bizarre and so satisfying at the same time. It might also make you contemplate a lot about your life, so be cautious about that. Make it a holiday read. You will not be disappointed for sure.

This was the second book I read as a part of ‘The Story Cure’ reading project. Also, it is holocaust literature, so it comes with the territory of tears, anger, and loneliness. There is nothing you can do about it when you start reading it. To top that, there is a movie based on this book, which I don’t think I will ever watch.

“The Boy in the Striped Pyjamas” is a book that will not leave you – perhaps because you already know how it will end, but also because of the writing. Boyne is simple, direct and quite powerful at his craft. The book is by no means a difficult read – it is just the emotions that need to be dealt with after that is tough.

Bruno, a nine-year old boy lives with his parents and older sister Gretel in Berlin. The year is 1942. One fine day as he comes back from school, he is told that they are moving to a place called Out-With (Auschwitz or so he pronounces or understands it throughout the book). His father has received a promotion. He doesn’t have any friends in the new place. But it is the Fury’s order who father works under (the Führer – of course we all know it is Hitler. Again Bruno cannot pronounce it so he calls him Fury throughout the book) and they have to go to Out-With.

There is a tall fence there that separates him from some strange place – all wearing the same clothes – all dressed in striped Pyjamas. This is where Bruno meets Shmuel – a skinny, gray looking boy and their worlds will never be the same.

Boyne’s characterization skills are superb. The characters – including the parents, Lieutenant Kotler and the servants are gripping. Their sub-plots convey so much throughout the book and yet it doesn’t stop being a young adult book. It continues to maintain its innocence and has so much to say. The writing is funny also at times, mostly it is heartbreaking though. I don’t think I can bear to watch this movie. The reason it was a part of “The Story Cure” is as it answers the question “What it’s all about?” – it will cure you of it – all the angst (some of it) and perfect for teenagers to know what happened and how did the Holocaust play out for most. I almost didn’t want to read the book – but I am glad I did. Read it, but do keep the box of tissues handy.

“All the Birds in the Sky” by Charlie Jane Anders has been the ultimate sci-fi read for me this year. It is also a fantasy read, and it is also literary. It is hard to believe that this is a debut novel by this author. She has written novellas and short stories before this one, but surprisingly before this one I hadn’t heard of her. Thank God I did now and will look forward to reading more from her.

This book is about two people – who meet as children and then again at various points throughout the book. This is a love story as well, but not the conventional kind, let me add. It is a story that is character-driven mostly. The plot is essential but somehow it felt that it was going nowhere. Now let me tell you something about the book.

“All the Birds in the Sky” is a book about magic and science and whether or not the two go hand in hand. There is destruction, magic and a lot of fantastical elements in the book. Patricia Delfine and Laurence Armstead are the protagonists who are trying very hard to understand their gifts, responsibilities and how they feel for each other as the book progresses.

They are oddballs to the core. Their parents do not get them at all. Patricia’s parents think of her as lazy and prefer her older sister. Patricia turns to nature and there she discovers herself and the magic she holds within. Laurence on the other hand is a tech geek who builds a two second time machine, when Patricia meets him. They both take to each other. They just want to be themselves in this chaotic world and don’t know how to. Till a mysterious teacher Theodolphus Rose enters their lives and things change. He has seen the future and wants the two to stay apart. What happens next – how they are away, meet as adults and how life changes at every step is what the rest of the book is all about.

The writing soars. There are parts where you feel you have been short-changed and want more, but Anders makes up for it more than you’d like later. It is a fast-paced book – the one you just can’t stop reading. Pages turn and fly and so does your imagination. The battle between science and nature is a real one and this book talks about it in so many metaphors – it is beautiful. Thumbs up for this book! Do read!