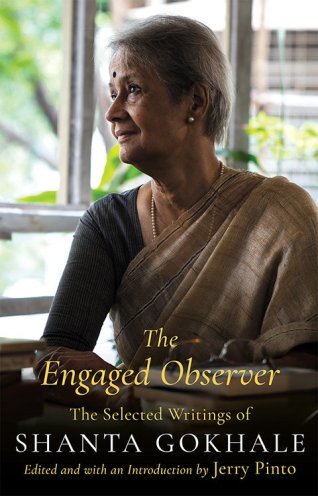 You do not just read Shanta Gokhale. You literally take in everything she has to say, and mull over it for days, weeks, and sometimes even months. That to me is the power of prose, of words on paper, and most of all it is about the emotions she can evoke in you. You read Shanta Gokhale to take count of the world around you – to see its decline, the society we live in, its hypocrisy (laid out by her with immense logic and facts), and how at the end of it all, there might also be some hope and redemption.

I remember reading Crowfall way back when it released (in English though) and was moved deeply by it. There was nothing specific I could put a finger on, but what she wrote was enough. All of it. Every single word. What Jerry Pinto does through this anthology of her selective works is give you a fair enough glimpse into her mind and writing, so you can read more of her and I bet you will, once you are done with this one.

This book is varied – that because Shanta Gokhale is so prolific – having written so much – from theatre of Bombay to the theatre of Mumbai, the political scenario, on India, on Literature, the Marathi culture (that is trying very hard to revive itself), and everything else in between. I don’t think there is any topic that Shanta Gokhale hasn’t written on. But it isn’t just this, it is the way she writes – almost makes you feel that you are the only one reading her at that time.

The Engaged Observer (what an apt title) is about so many things and yet doesn’t feel overdone or trying too much to fit into one book. In fact, if anything, I wanted more. Shanta Gokhale writes with clarity. Every sentence is in place. My favourite section has to be the one on women – the patriarchy, feminism, and women defying the misogynistic constructs of society.

Shanta Gokhale’s writings are lucid, rich in facts, detailed, and doesn’t veer at any point into becoming something else. Points are made and then it is up to the reader to make their judgement or not. The writings are not biased. As the title aptly suggests, Gokhale observes intently, engages with the observation by making notes, writing about it, and leaving it to the readers to consume. Also, kudos to Jerry Pinto for carefully selecting the pieces he did to introduce us/enhance our understanding of the writer – and the neat sections that help the reader navigate.

There are a lot of reasons I would recommend this work. Some of them being: clarity and simplicity of language, the varied pieces – there is literally something for everyone, and to top it all her writing – the kind that cuts through without seeming that way, the kind that makes such a strong impact that you cannot help but want more, the kind of writing that shakes you up and makes you see the world differently. It is the kind of writing that only comes from an engaged observer – the one who constantly sees, relates or does not, but definitely engages – no matter where she is.