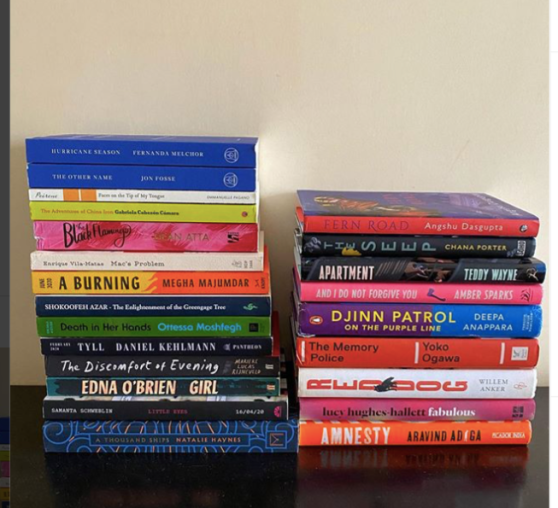 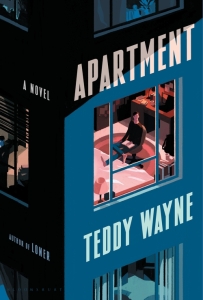 I absolutely love books with unnamed narrators. You don’t even know if they are reliable or not. You don’t know their name, so in all probability, there is so much hidden that comes to fore and that somehow always happens when I venture into such reads.

Apartment by Teddy Wayne is an excellent book, not only on the human condition but also on a brilliant character study of loners and how men sabotage their relationships. The unnamed narrator sublets an illegal bedroom while he attends Columbia’s MFA writing program. At the program, he meets Billy, a Midwest, working-class bartender who wants to write and make a way in the world. Basis one incident at the workshop, the pair strike an unlikely friendship, resulting in Billy getting a place to stay and the narrator somehow desperately needing Billy’s approval and validation.

So, the book started off strangely for me. The passive-aggressive dance between the men was somehow too much to handle and then it became easy. There are opinions and several of them throughout the book, which makes for very interesting reading.

Wayne’s writing falls on the thriller/mystery device and somehow that worked for me, even though there were some parts when the characters did not connect with me. That being said, I did finish the book in three days, while reading other books.

Apartment is fast-paced and well-plotted. It keeps you on the edge (in some ways) and also makes you aware of what happens when relationships take a bitter turn when there is no good side or bad side when there is just how events play out, and how people react to emotions – of self and others. Apartment is a great story about men and their lives, quite interestingly told. 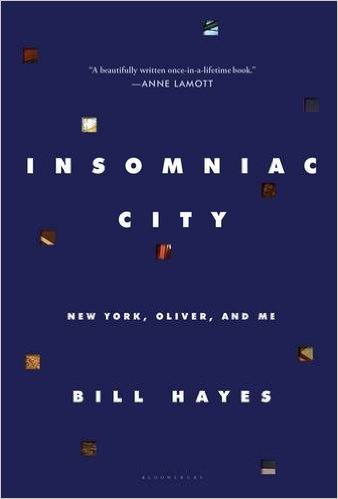 I remember a friend sending me excerpts of this book. I read it while I was at Doolally – a taproom in Bombay. I was waiting for friends to show up for the Wednesday night quiz and then something happened which I hadn’t expected to – I wept by the time I had finished reading the long excerpt. I cried. I think I even bawled. I strongly also believe that when an art form does that to you – when it creeps up on you like that and almost shatters your world – you’re in for a rollercoaster ride. That happened to me as I was reading “Insomniac City: New York, Oliver and Me” by Bill Hayes, from which the excerpt was.

Relationships are fragile, they are also very strong. At the same time, what do you do when it ends all of a sudden? When it ends not because you want it to, but because death comes suddenly knocking on your partner’s door and there is nothing you can do about it. Then what? Hayes’s partner died after sixteen years of togetherness. He then moved to New York from San Francisco in search of a new start (as most of us do). He found himself in a city that was surprising, random, and at the same time made him see the humanity that exists. Slowly and steadily, he fell in love with New York and found love in the form of the late, great neurologist and writer, Dr. Oliver Sacks.

This book “Insomniac City” as the title suggests is about New York, Oliver Sacks and Bill Hayes. It is also about life – majorly so, and how it changes constantly whether we would like it or not. It is about New York – of how brutal and gentle she can be at the same time, of how to surrender to the city is to love her completely and without any prejudice. The book ultimately is about great love that transcends all barriers, challenges, doubts and the throes of darkness. There are also the author’s stunning photographs – capturing his love for the city and Oliver.

Let me not forget the portrait of Oliver Sacks that Bill Hayes paints so vividly and beautifully – a genius who did not own a computer – who always preferred to communicate via letters and longhand, who didn’t know how a champagne bottle was opened and used goggles when he first opened them for the fear of the cork hitting his eye, who called pot “cannabis” and who believed in living life as it came – day by day. Hayes met Oliver after Oliver wrote him a letter praising his book “The Anatomist” and this is how they met and love blossomed. The book is about that love, about how Oliver met Hayes after three decades of being alone and celibate. “Insomniac City” will surprise you in ways more than one.

“Insomniac City” is about the love between Oliver and Hayes and what they shared in Oliver’s final years. The writing is so personal and out there that you cannot help but be overwhelmed. Their love for things common, their roads to discovering something they did not know, and what it is to live daily – for the bond to strengthen and one fine day to see that love slip away. The book teaches you about grief, about people coming together quite randomly on a bus or a train and makes you more aware and conscious of what it is to be human. I cannot recommend this book enough. Do yourself a favour: Order it, read it and weep. You need a good cry, now and then. 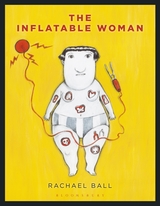 Hands down “The Inflatable Woman” is one of the best graphic novels I have read this year and it is not too early to say that given that more than eleven months are still to go. But this one by Rachael Ball stirs the heart and also makes you smile at the end of it.
Iris is a zookeeper waiting for love to hit her and charm the life out of her. She is at the same time chatting with a lighthouse keeper online who goes by the name, sailor_buoy_39 and she is balletgirl_42 though she doesn’t know anything about ballet.

And overnight, just like that, she comes to know that she has got breast cancer and there is nothing she can do about it but visit doctors, meet nurses, get to know other patients and still finds no respite. She is thrown into this world that she knows nothing about and is expected to face it with the support of her Grandmother, her friend Maud and a bunch of singing penguins.

What I loved about this graphic novel was the way in which the art is done. It is all black and white with Iris’s thoughts all over the place and then you have splashes of colour all over, just like life, isn’t it? I absolutely loved Iris’s determination when it came down to tough situations or her fears as well – when she thinks she can no longer handle anyone or anything.

Ball’s writing and illustrations are vivid, clear and also quite surreal given the context of the plot. “The Inflatable Woman” to me was a one-of-a-kind graphic novel. I enjoyed it immensely and could not get enough of it at all. 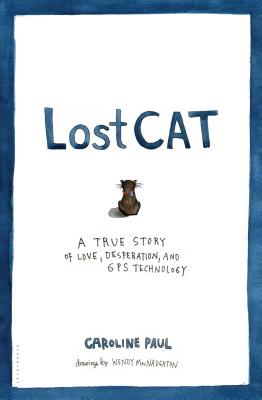 All one needs on dreary days is a book which warms the cockles of the heart and leaves you spellbound, more so if it is a true story, and a true story of a cat at that. It is about cats and animals in general and the love one has for their pets. It is beautifully penned – simple and straight from the heart. “Lost Cat” is a true story of love, loss, and the meaning of life, written by Caroline Paul and illustrated gorgeously by her partner, Wendy McNaughton. 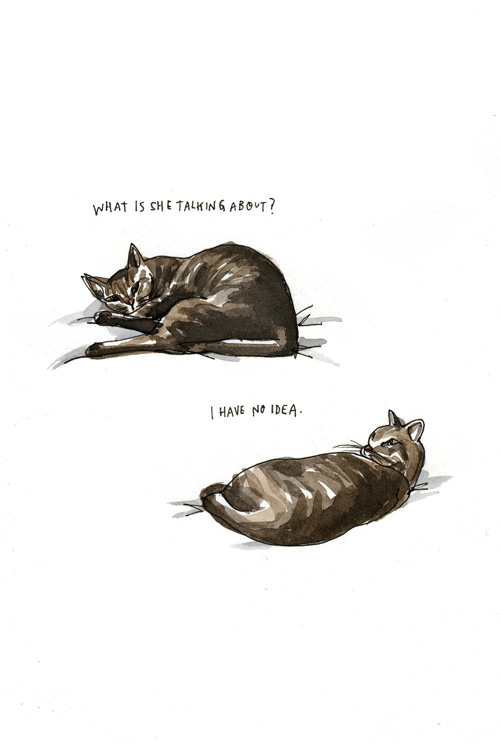 One fine day, Caroline was in a plane crash and life changed completely for her and her partner. She was at home for the longest time with her two cats Tibby and Fibby. Fibby was the feisty one and Tibby the silent, scared cat. Tibby disappears one day and returns home after a while. Caroline was relief beyond words and yet in some way Tibby had changed. It is then that Caroline started wondering: Where did Tibby go? What had happened to him? 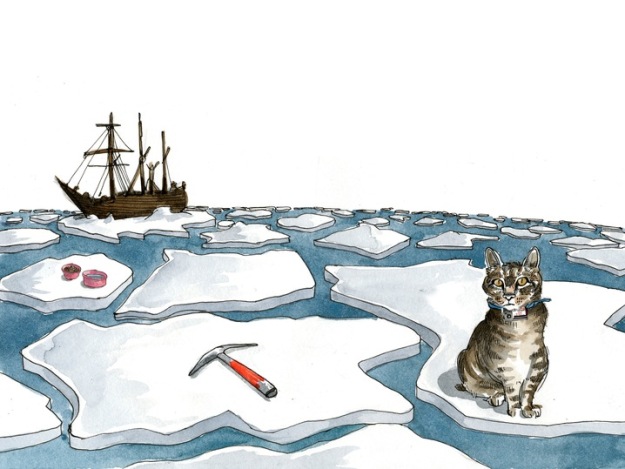 This is where the book begins. Caroline decides to use modern technology to find the tracks of Tibby. She wonders what happened. She and Wendy are distraught. “Lost Cat” is the story of what happens after. The book seems to be a book for children, but it is for adults. It is about the places we go to when pets disappear, when they are back and what happens when we try to find out more about their behavior and life. 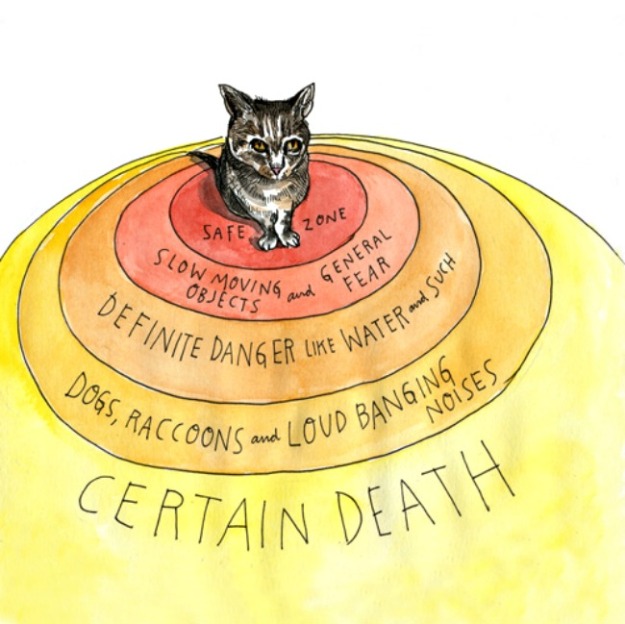 The illustrations are adorable. Wendy McNaughton has done a wonderful job of bringing their story to life through these drawings. “Lost Cat” is a story that will make you smile, make you cry, make you feel a lot more and will immediately want you to go and hug your pet – dog or cat or hamster. 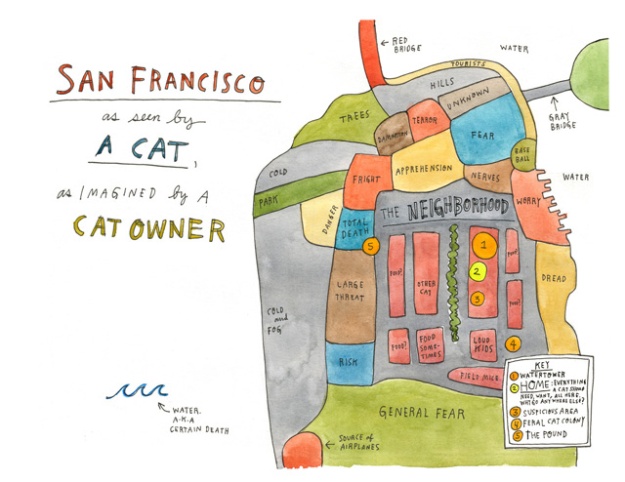 Here is the adorable book trailer of Lost Cat: