Heaven triggered memories that should’ve been left alone and not touched. The memories of being bullied at school, by four boys who called me their friend, and yet would bully me every single day for five years.

Heaven by Mieko Kawakami is perhaps all our story – of the ones who were bullied at high-school, the monstrosity of it all, the nightmare, and the solace found in unexpected people.

The book isn’t an easy read. Kawakami will not make it easy and redemptive. The bullies will bully and will think of innovative ways of doing so, for instance, taking the unnamed narrator’s head and using it as a football. The description isn’t nice. It isn’t meant to be. It is raw and gritty.

The unnamed fourteen-year-old (who also has a lazy eye) goes through all of this and more, till he meets someone at school – Kojima – a kindred spirit, a classmate who is also being bullied by a bunch of vicious girls, through exchange of notes, their friendship blossoming, and they rarely meet. Over a summer break, they visit an art museum, where Kojima plans to show him her favourite painting about men and women who have discovered harmony and joy after immense suffering. She calls the painting “Heaven”.

The book is set in early 1990s in Japan and to me it was the most beautiful meditation on the nature of suffering, coming of age, and what it is like to perhaps overcome in some manner or the other. They aren’t lovers. They will never be. But they are bound by their suffering and constantly asking questions around it: What is it? When will it end? Why are they going through it?

The translation by Sam Bett and David Boyd is concise and to the point. Having read Breasts and Eggs by Kawakami, also translated by them, I can say that the tone is spot-on. The atmosphere of the school world of Japan in the 90s is clearly communicated. I loved how the translation does not ramble away to explain anything – it lets the prose be for people to see and doesn’t tell anything.

Heaven is a book that might seem YA as it did to me when I started off but worked on so many other levels. The poignancy of growing up, but to have to do so when being exposed to bullying made me go through all of my school life in my head, and it wasn’t easy at all. Perhaps it was extremely cathartic as I did find myself not reading after a point and tearing up, but it was also needed to revisit it all, for life like fiction to transform. 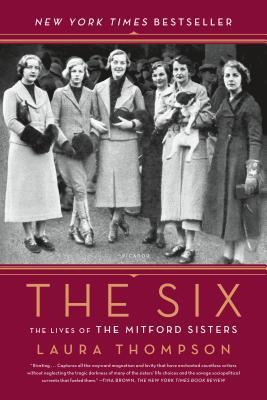 When a non-fiction work reads like fiction, you know you have struck gold on so many levels. “The Six” is a brilliant example of that. First, it is the story of the Mitford sisters. Second, it is superbly written by Laura Thompson. Third, the pace. I have often realized that I get bored in the middle of a memoir or biography and that did not happen even once during the read of this book.

“The Six” as the cover tells you is about the life of the famous Mitford sisters. Born to the 2nd Lord Redesdale between 1904 and 1920, their lives have become synonomous with the darkest periods of history. The Mitford sisters comprised of Nancy, a highly succesful historian and novelist; Pamela, who lead a quiet life suffering from polio and other diseases; the glamorous Diana who broke all rules and divorced her husband; Unity – the most infamously famous who was so taken in by Hitler and his philosophy; Jessica, the communist and Deborah who finally married a Duke and became a Duchess. These were the six Mitford sisters. The book is not just about them though. Thompson magnificently covers history – sneaking up on you between the pages and blending it beautifully with the sisters’ stories.

Thompson covers it all – the glitz and the glamour and the riches to the failed loves and relationships. Nothing has been left out conveniently. A lot of analysis of each sister and their relationship with each other is honestly told and that to me is the highlight of this rivetting read. Thompson does not leave any stone unturned and like I said the writing is easy and yet intense, covering it all and somehow leaving so much room to imagine the ongoings. A read that perhaps may not be for all, but a great one nonetheless.

I love Didion’s writing. So I may be biased, but that’s alright. I remember the first time I read Didion. It was “The Year of Magical Thinking” and I was floored. I was gutted as well, amongst other things that I was feeling as the book ended.

“Slouching Towards Bethlehem” is a collection of essays written in the 1960s, almost fifty years ago – a time and place that current readers have not and will not experience (not that I have as well). At the same time, somehow while reading the book, it all came alive right then and there. Didion paints not just one image but a landscape on paper. Her talent is truly timeless and every time she writes something, she almost supersedes the last piece/book.

Didion’s writing though may seem America-centric but is actually quite deceptive, in the sense, it encompasses the world-view which you only understand after a couple of essays. Maybe that’s why (one of the many reasons for sure) that this book was the one that was the essential breakout work.

Didion’s prose is grounded. It doesn’t stray at any point in time. From speaking of Joan Baez (which is a very affectionate portrait of a highly intelligent woman) to a think piece on the Santa Barbara Coast to Las Vegas and the culture of quickie marriages, there is always this sense of voyeurism and at the same time,​ this need to soak in more of what she writes. This collection, ​in fact, reminded of her other collection of essays, The White Album and After Henry, whose content is very similar to “Slouching Towards Bethlehem”.

It takes a while to kick into the book, but it is also a good beach read (Surprised? So was I when I started it on a quick getaway). Her musings about life, in general,​ are also worth reading, even if you might not agree with some. “Slouching Towards Bethlehem” is one of the best essay collection you will ever read. So, please do not miss out on it. ​

Hilary Mantel is an author that should be read by everyone. I don’t mean it because she is a Booker-Prize winner (twice at that, and consecutively so), not because her fiction is par excellence, but because of her memoir. The memoir that will break you, make you smile, make you relate, and feel all sorts of emotions. At the same time, it is about feminist literary circles, about women who write and without fear, and literally about “Giving Up the Ghost”.

I cannot talk about the book in a linear manner because it is also not written that way. This memoir is about how a poor child of Irish origins, from a disadvantaged family, grew to become one of the world’s most celebrated novelist. Through her story, Mantel touches on other stories – the ones that we can relate to the pinnacle and back. She speaks of home, growing up, books, and more books and above all how she was subject to visions, to “seeing things” that weren’t there. Spooky, isn’t it? Were they real or just a condition because of her hormones as she had undergone an early hysterectomy?

The pain and clarity in the writing is astounding. She speaks of her novels as the children she would never have. All along she speaks of women – literary women mostly and their lives – and also strangely ties in the century and its on goings.

At no point does Mantel’s writing become pitiful or self-loathing or wanting attention. It is what it is and she has written it in a very matter-of-fact tone. The book doesn’t meander or amble and combines all of it quite beautifully. Honestly, you don’t even have to read her novels to read the memoir. Just dive in and be prepared for a fantastic, heck of a ride!

“The Book of Memory” is the kind of book that creates ripples in your heart and you will not be able to control how you feel. I think that happens to me the most when I read books that have unreliable narrators. There is this sense of thrill and caution and at the same time, a strange sense of empathy that emerges for such characters. I like books that the central character is so strong and yet doesn’t overpower the entire book. This one is that sort of a read.

Memory is an albino woman who is in Chikurubi Maximum Security Prison in Harare, Zimbabwe. She has been convicted of murder and as a part of her appeal, she has to write exactly what happened. And this is where the unreliable narrator angle begins (coupled with the wordplay on the name Memory, which as one goes along in the book means and stands for so much more). She has been convicted of murdering her adopted father, Lloyd Hendricks. Why did she kill him? Did she kill him at all? What exactly happened?

Gappah creates a book that might seem repetitive in terms of plot but isn’t when it comes to her writing for sure. And then again, once you are about half-way into the book, the plot also doesn’t seem repetitive or something you have read before. The characters are strongly etched and to me beside all this, it was only the writing that took the cake and more. What is also strange according to me is that Memory’s parents send her away when she is eight years old and that is not brought up again in the entire book. I thought it was oddly weird.

Having said that, “The Book of Memory” sometimes reads like a thriller and sometimes just a literary fiction book which has so much to give. The mutable nature of memory is there throughout the book – that is what makes it so unique and mysterious at the same time. All in all, this one was a hugely satisfying read.