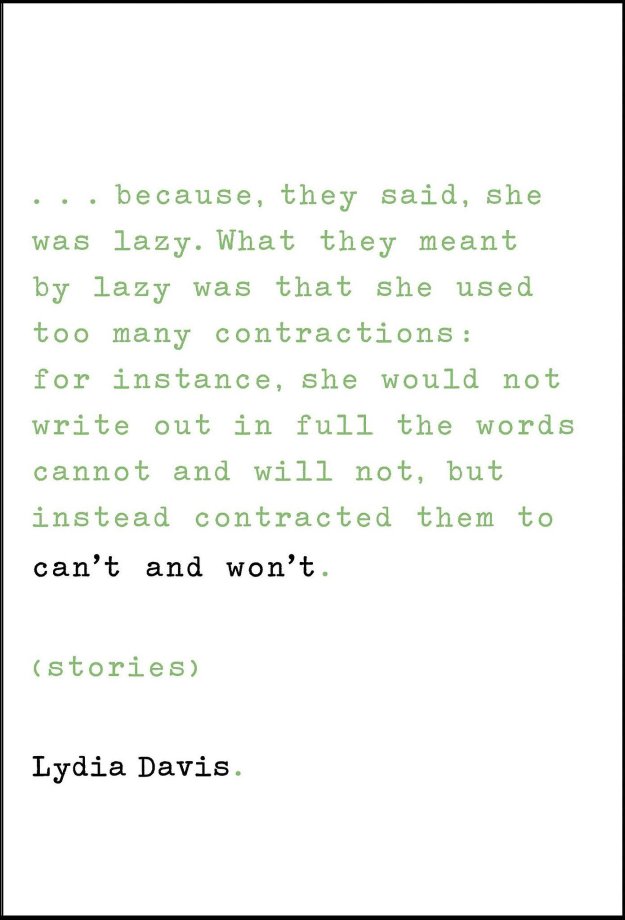 When Lydia Davis writes short stories, you take notice. You observe them and linger in their bitter or sweet after-thought. You also get confused. You wonder what her stories are about. As a reader, you also want to give up some times. You do not want to turn the next page. That is what you feel like and you cannot help it. You keep the book aside and after some time you get back to the book and then it hits on you, what you have been missing out on. And then the true beauty of her writing hits you.

Lydia Davis’s new collection of stories, “Can’t and Won’t” is a fantastic collection of vignettes, of short stories and of really long stories. At some point, I did not have it in me to soldier on, and yet I did. I think most of it also had to do with the fact that I had read Davis’s stories earlier. So my recommendation would be that to read some of her works online and then you will absolutely love what she writes and the way she expresses herself.

“Can’t and Won’t” is a collection that makes you ponder, makes you doubt, leaves you confused, perplexed and at the same time wrenches your heart with the most basic observations about life and living. Most of these stories are either retellings of her dreams, or related to Flaubert’s life (which are brilliantly reconstructed) or tales that are about painful memories and indecision and wanting to deal with life.

The stories are sometimes complex, sometimes simple and sometimes just make you want to drop everything else and think about life. “Can’t and Won’t” is expansive. It is a collection that challenges you, delivered in well prose and above all conjures a sense of wonder and delight, with every turn of the page. 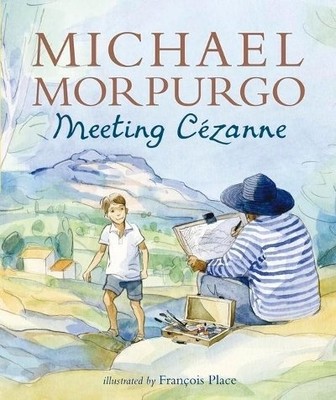 I had heard a lot about Michael Morpurgo and his books before I started reading “Meeting Cezanne”. I now know why both kids and adults love him and his works the way they do. There is something about the way he unfolds a story. It transcends age. Both adults and children can read his works and feel that gooey, buttery feeling and be happy, even if it means that happiness is temporary. A reread will transport you back to the feeling nonetheless. If that is what one Morpurgo book could do to me, then I am definitely reading all that he has to offer.

“Meeting Cezanne” is for young readers. The setting is 1960s. It is about a ten-year-old boy Yannick, who has to stay with this aunt, uncle and cousin in the South of France, as his mother needs recovering from a treatment. Provence is the place to be, or so the paintings of his mother’s beloved Cezanne say. It is paradise on earth and all of it. Yannick is hesitant to stay with his Aunt Mathilde and yet in the process, he waits tables at his aunt and uncle’s restaurant, he befriends his cousin and makes an amazing discovery about an artist who regularly visits the restaurant. The discovery is made when he accidentally destroys a precious drawing.

This is the plot of the book. Now to the way the writer and the artist have presented it to the reader. The writing is very simple (but of course, since it is written for children). The illustrations by Francois Place are just perfect and one just wants to constantly gaze at them, way after the book is done with. You will most certainly finish reading the book in less than an hour or so. I think the beauty of this book is that its appeal is so vast and also the fact that anything told so simply has no choice but to be beautiful. “Meeting Cezanne” is a perfect monsoon read for children and adults alike. 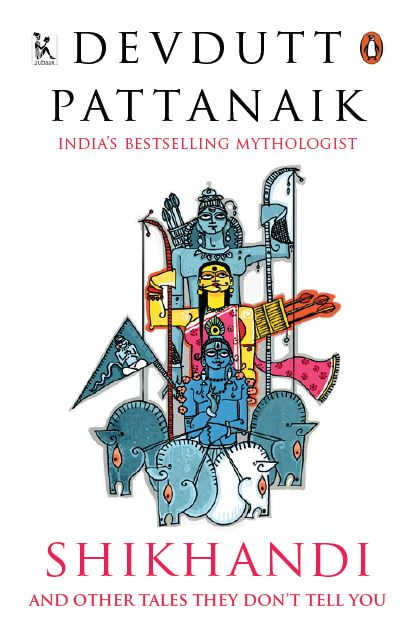 There is so much to Indian Mythology that remains hidden. There is so much which no one speaks of. Of hidden desires (maybe), of stories that somehow do not surface, because we are too civilized for our own good. We are full of shackles and intimidation and fear and to top it all ego, which do not let us realize our true selves. Somewhere down the line, perhaps, we have also been too apologetic of our traditions and culture – first to the British and Europeans and then to ourselves. The stories need to be told to change perspectives. The answers need to be out there with the questions, so people can decide for themselves without being brainwashed. “Shikhandi and Other Tales they don’t Tell you” by Devdutt Pattanaik is one such attempt.

“Shikhandi” is a book of stories. Stories that have been forgotten – mostly intentionally I would think. Stories that celebrate the queer, the ones that do not differentiate between the masculine and the feminine, where form does not matter as much, where it is about fluidity and not rigidity of gender and where clearly it is about celebrating life. Devdutt tries to uncover stories in mythology about men and women, about gender bender, about situations where roles were reversed for good reason and sometimes for no reason at all.

To me, “Shikhandi and Other Tales they don’t tell you” is all about liberation. While reading it, I felt liberated and maybe that is the purpose of this book. From Narada who forgot that he was a man, to Indra who took the form of a Brahmin to make love to his wife when he was away, to Krishna who cross-dresses in time of war and peace for various reasons to more Gods and Demons and Kings and Queens who are not rigid about sexuality and gender, “Shikhandi” is a work that transcends orientation and gender.

The writing is precise and concise. The stories can be read in a day and yet how can one understand Queerness for all that it is, in a day or a week or even a fortnight? To then connect it to mythology is another matter altogether. To then not be judgmental about it is far beyond another issue. Devdutt’s stories are not about intrigue. They are not about provoking for the sake of it. They are provocative because it is time we drop the blinders and look at the world different, away from our myopic vision and conditioning of what is wrong and what is right. The illustrations and foot-notes are trademark Pattanaik and work wonderfully in this book.

“Shikhandi” is a paean to the marginalized, to the differences (seemingly so), to the unseen and the not spoken about tales. After interviewing him for Jaya and after reading Jaya, I thought there was nothing like that book. I was wrong. In my opinion, it is “Shikhandi and Other Tales they don’t tell you” which is his best work. Go broaden your thinking. Read this book for sure.

Here is the book trailer:

Buy Shikhandi : And Other Tales They don 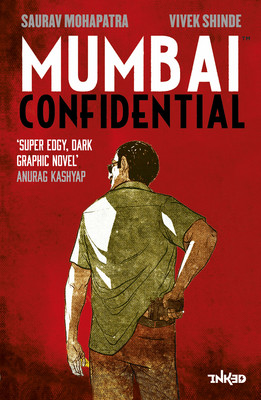 What better way to depict the dark and gory underworld and cop politics of Mumbai, than through a graphic novel? The underbelly is fantastically done with shades of brown, black and grey. Sometimes it also may happen that some graphic novels fail to convey what they want to, but that is not the case with “Mumbai Confidential” by Saurav Mohapatra and Vivek Shinde.

The book is set in Mumbai (but of course). It is the story of a cop, rather an ex-cop, Arjun Kadam who had it all going for him, till it all fell apart – both personally and professionally. He is no longer the man he used to be. He is addicted to heroin. He somehow has no will to live. There is the ACP who used to be his mentor and still considers him to be his protégé. Another cop is after his life. To top it all, there is a hit and run and Kadam survives, but a young urchin loses her life and Kadam will do all it takes to bring her justice.

There is everything in this graphic novel. It is fast-paced, riveting and has Bollywood with doses of underworld and suspense. However, the personal tragedy that occurs with Kadam should have been brought out well in my opinion. It was too rushed. The illustrations are terrific. They bind you and make you spend time on every page than just flip them soon enough.

The blocks and the blurbs are uniquely done. There is an effort put here to tell a story, to see it through from start to finish in a well-coordinated manner. The graphics depict the city’s dark side brilliantly. Vivek Shinde’s art and Mohapatra’s storytelling goes hand in hand quite well, providing the reader with a rollercoaster of a ride, laced with delusion, despair and some hope.