Who are the underdogs? What makes them underdogs? Are they weak or is it just another perception of people who cannot understand some things and therefore, love to label them to their convenience? Perhaps the concept of the underdog has been grossly misunderstood. Perhaps it needs to be relooked given how some of them have fought battles and won against giants, with may be limited resources. Is it always the case though? Do underdogs win all the time? Did David win against Goliath by mere chance or did he have some clear advantages, which the giant did not? With this premise in mind, Malcolm Gladwell’s new book, “David and Goliath: Underdogs, Misfits, and the Art of Battling Giants” is all about this principle, presented with facts and approaches it with a range of examples of the number of Davids and their struggle to get ahead.

I had read one book written by Gladwell before reading his latest work. I was hesitant – also because I had heard that the book was not that great. However, I took my chance and read it, finished it in a span of a day and a half and thoroughly enjoyed it. The book hooks you on from Page 1 and then there is no letting go. I think to a large extent the book connects with you, because we all feel that we have been or are underdogs at one point or the other. So you not only end up reading the book for what it is, but also silently cheering for the misfit to make it big.

The book is divided into three sections – the first one is about how advantages are sometimes disadvantages and vice-versa. Things are never what they seem and one always has to look for different alternatives to rise above. From a novice basketball coach to the number of children in one classroom in the schools of America and across the world to the most interesting theory of “Big Fish in a Small Pond and Small Fish in a Big Pond”, this section is my most favourite in the entire book. The second section is about weaknesses and how desirable they can be given how many people succeeded with them. Handicaps need not always be handicaps. The third and final section of the book is about the limits of power and how it does not always be everything, given any context or situation.

“David and Goliath” is not only an insightful read, but also at some level it does become a personal read, right from the first to the last section. You tend to relate to situations and anecdotes and I found myself nodding in affirmation to most of them. The book is a light read. The statistics do not flummox the reader, which is very good, given the nature of the book. “David & Goliath” is the kind of book that will make you contemplate situations around you and probably reassess them – mostly with respect to the so-called “misfits and underdogs”. 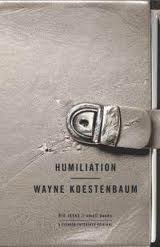 Wayne Koestenbaum’s, “Humiliation” is a unique book. At first I did not know what to expect from it, however the more I read and finished it, the various aspects of humiliation became clearer and I came to realize the very core of being shamed in public. The way I look at it, Humiliation has at one point or the other been a part of everyone’s life. We have all been humiliated, sometimes intentionally and sometimes unintentionally. From a simple aspect of asking one’s salary in public to commenting on someone’s clothes when surrounded by friends, is also an act of humiliation. As Wayne Koestenbaum talked and discussed Humiliation through the book, the more I cringed, laughed and empathized at the same time.

Humiliation is a collection of 11 fugues and all of them but of course are connected by the one theme. Humiliation is an interesting account of Koestenbaum’s mind and his perceptions of the topic and there are times that the book illuminates us on the very concept of it. Why do some people take pleasure in humiliating another human being? And more so, why do some people take pleasure watching or being witness to that? What is it within us that leads us to enjoy another person’s misery?

The most interesting part of the book for me was the “Jim Crow Gaze” which is about the indifferent stare that people give the ones who are being humiliated. The fact that they do not care, the indifference of it all, makes it even more humiliating as you cannot see one friendly face in the crowd. That hit home like no other part mentioned in the book and I guess that is because we have at some point either taken on the Jim Crow Gaze or have seen it upon us.

Humiliation also speaks of the act in different cultural contexts as well, however I wish more was written on it, however it was not. Koestenbaum discusses the Holocaust, the act of insulting a man in a wheelchair in the washroom and the concept of Pride being attached to the act.

The book successfully managed to bring out the anger within me at various points. While the author recounts and as the reader goes along, the reader cannot help but react or think strongly – that is one of the side effects of writing about a topic which everyone has been party to – directly or indirectly. Koestenbaum has touched on the day-to-day instances of the common man and also spoke of humiliation from a celebrity’s perspective – Michael Jackson, Judy Garland, Prisoners of War, Lynndie England and Nixon.

Humiliation also has strong undertones – of sex, politics, power, office politics and school politics alike. It does not shy away from touching on any topic. The book is frank and Wayne does not believe in mincing words. The book is not something that can be read on a beach, neither it is a flight read. Humiliation requires time and patience and more time after finishing the book, to think about it.

The Hundred Brothers by Donald Antrim is nothing like I have ever read before, and neither would you have if you ever get the chance to read this book. This book is strange – it is not even weird strange and it takes time to get your teeth into this one, however once you do, it will be very difficult to get yourself away from it, till you have finished it. What is the book about? Well, here goes:

The story is about one hundred brothers (literally, minus one though) who come together for dinner one night. The objective is to possibly find the urn which contains their fathers’ ashes. One of the brothers is our narrator. He quickly descends from trustworthy and seemingly normal to crazy. But why and what happens to him, is something you have to read and find out for yourself, or else that would be a spoiler and I would not want to do that to you.

The Hundred Brothers quite literally speaking is a stream of consciousness – while a lot is happening, nothing really does happen. Donald Antrim has touched on almost every masculine behavior and thought pattern that there is to cater to for the reader – from pornography to homosexual references to sports to hunting to bullying – all the male archetypes (almost) are mentioned and that’s what to me made the writing fascinating.

A lot of times “The Brothers Karamazov” flashed before my eyes while I was reading the book and why not? They both are about brothers and a crazy family. There is the gradual crescendo of horror from humour and every brother, including the narrator has glaring faults in which we also recognize our own. The setting, obeying the Aristotelian unities of time and place, seems to grow and evolve in a nightmarish fashion. The love and hatred between the brothers is searing.

Antrim has a way of establishing a rational and simple universe, and then subtly and ironically, disseminating it bit by bit, gradually to show us what lies beneath the surface. His writing is twisted to the point that the reader does not want to move on and yet is compelled to do so. His allegories are mischievous and mysterious at the same time.
There are no chapters in the book – it goes on, the premise is huge, magnanimous almost – making the reader wonder, how did he ever get this idea? What propelled him? And then there are the dynamics between the brothers – the way the writer intended it to be portrayed. I do not want to classify the book or the writing to any form. It is best left untouched, however make note of one thing: Read this book and read it one sitting. Let it play with your head. Let it take you on a very strange rollercoaster and by the end of it, you would be wondering why it ever ended. It is that good.

The Hundred Brothers: A Novel

Buy The Hundred Brothers from Flipkart.com