This for now is the strangest book I’ve read in 2020. I mean it with the utmost admiration for the author, Claudio Morandini to have the capacity to spin such a fantastical tale of a man, a dog, and a human foot that appears poking out of the receding snow.

I don’t know what to make of this novella. It is a thriller (in some sense of the word), it is also a meditation on loneliness and deliriousness, and more than anything else it is about the reality of hunger and survival.

Adelmo Farandola doesn’t like people. He doesn’t like animals. He doesn’t like anyone. At one point in the book, I was certain he didn’t even like himself given how he lives. Till he meets a dog and starts interacting with him (interesting, isn’t it?). The winter that comes upon them is harsh. There is nothing left to eat. The village is in the valley and it’s impossible to go down there. What remains to be seen is who will eat whom first: the dog or the man. In all of his, they chance on a dead body that adds another twist in the tale.

Snow, Dog, Foot is a strange book (like I said at the beginning) but it is also very satisfying. It checks all boxes and leaves a lot unsaid. The translation by J Ockenden to me seems exact and not at all out of place. The prose beautifully captures the scene and harshly tells us readers what’s in store for us as well. All of this is very gently and sometimes hastily communicated to us. It is a book that is part humane, part deranged, and part thrilling. 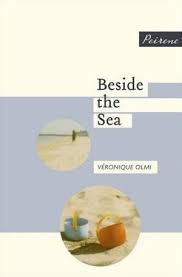 What would drive a mother to kill her own children? Why would she do that? Which mother ever does that? What must be the situation or circumstance that propelled such behaviour? I had these questions raging in my mind, when I read about 3 weeks ago in the local newspaper, that a woman had flung her 2 children – aged 6 and 11 years old and then took the path of suicide herself. She could not handle the stress at home and her husband wasn’t supportive of her choices either. I stared at her picture for the longest time and then it struck me that I studied with her. She was almost my classmate. We knew each other. I had once upon a time laughed with her. I could not get her out of my head for the longest time and she still lingers there somehow.

The reason I mentioned all of this is when I started reading, “Beside the Sea”, my thoughts time and again centred on her and her children. The book is about a nameless mother and her two children Stan and Kevin and their trip beside the sea. The story is set in a nameless town – grey and dark and full of rain and mud. There is no mention of any colour in the entire book and may be that is how it is supposed to be, given the plot and the atmosphere. Well the story hinges on the two day trip and aftermath. I had to give the spoiler away since I had to mention what I was going through and what I had experienced.

This is no joyful jaunt to sun, surf and sand. Instead, we discover a deeply disturbed mother, already on the edge, afraid for the life of poverty and exclusion that she fears her boys are destined to lead. Determined to give them at least one happy memory, she takes them on a holiday that she cannot afford and has not properly planned.

We are introduced to the two little boys, Stan and Kevin, through the eyes of their mother allowing us to develop a proxy parental concern for them. The story is told from within their mother’s mind but she remains nameless, allowing us to feel empathy for her while still keeping her at arms distance.

Seeing the experiences of this family through the eyes of the boys gives a sense of wonder and delight, but the covering veil of the mother’s thoughts and emotions and the constant presence of rain give the story a continual sense of darkness that leads to a disharmony – a sense that something is not quite right.

My head was empty when I finished reading this book. I don’t know why. I know and yet the book shook me in several ways, ways I did not think it was capable of. The book takes you by surprise (or may be by shock?) and manages to make you think long after you have finished reading the book. I thought the translation was perfect considering it was originally written in French by Veronique Olmi. The writing is perfect, neither too less and nor too much – anyway that’s how a novella should be written, isn’t it? I did not want to know more at the end of it. I was satisfied. I have had a roller-coaster of an emotional ride while reading this beautiful work. So must you.

You can purchase the book here on Flipkart

This latest publication from Peirene is a fascinating dissection of misunderstandings and failure to communicate that can lead to the failure of a marriage. But Hinrich Schepp doesn’t realise any of this until after the death of his beloved Doro, when it is too late.

It’s short, a novella rather than a novel, as implied in the title, but its 138 pages contain a depth of miscommunication and loss. The book begins after Doro has died, when Schepp discovers her sitting at an awkward angle in her chair, as if she had fallen asleep while editing the manuscript that lay on her desk. His sense of shock and disbelief as the realisation dawns is beautifully and sensitively described:

`Everything will be all right again, Schepp assured himself, and at the same time he was overcome by the certainty that he was choking.

“At least say something,’ he whispered finally. `Just one word.”

The story is a mere snapshot, one day in the life of Schepp, an academic in an arcane field of ancient Chinese language. It is through Schepp’s recollections and the notes on the manuscript Doro was editing before she died that we experience the depth of feeling and misunderstandings, and how they had arisen. The details of pertinent points in their relationship are portrayed in detail such that there is no need for more, no need to know what happened during the intervening years, and it is exquisitely translated from the German, occasionally wry, occasionally with a light touch of humour. For instance, in the early days Schepp habitually took Doro a pot of green tea in her room at the university, .

So the story is told through his reading of the manuscript and Doro’s notes on it about the marriage and sometimes about the lives they lead. What I loved is the story within the story so to say. The man who has a crush on the waitress is her husband as she is editing the manuscript. As he reads Doro’s notes and corrections, he understands that she knew all about the things he thought he had kept secret.

At one and the same time he dissects the narrative of the putrefying corpse of a failed marriage and clinically examines the role of the writer and reader in making texts. He interweaves three story strands to explore where writing comes from and who makes and owns meanings. The uber- narrative of the unfolding of Hinrich Schepp’s and Doro’s disintegrating relationship is interrupted by a story Schepp wrote decades previously, before his marriage. It portrays a semi-erotic fantasy of unrequited lust, which is dramatically realised in more recent years, yet unrequited in real life, apparently. Politycki’s main protagonists interface only in writing and rewriting. Fact, fiction and memory seem ironically unstable. Doro, in the shifting course of events has moved from editing Schepp’s work to correcting it and ultimately rewriting and continuing the story, making it her story, her version.

Perhaps the authorial choice to provide two endings to the novella can be seen as an assertion of writerly authority. Yet again all we have are versions of events and some readers, disrupted and unsettled by what they may perceive as an intrusion of a second ending may choose to privilege ending number one. Of course, some readers will prefer the second ending’s less macabre implications and seek some readerly solace in a more fantastical return to the radiant beginning of Hinrich and Doro’s love. Before the rot set in.

Readers will not feel neutral at this point of the book. In the end, Politycki shows himself equally to be a reader’s writer. For what more could we wish for? A page-turning twister of a tale, playing with versions of reality, whilst its literary tentacles wrap us around in this fantastical and stylish twenty-first century exploration of nothing less than our own Momento Mori.

`Next World Novella’ is a great two hour read. And an even better two hour re-read.

And last but not least, I would like to celebrate Anthea Bell’s remarkable translation of this wry, poignant and very telling tale. I felt the intense pathos when two people in a marriage are not able to tell each of their feelings, when a marriage breaks apart due to it and changes forever.