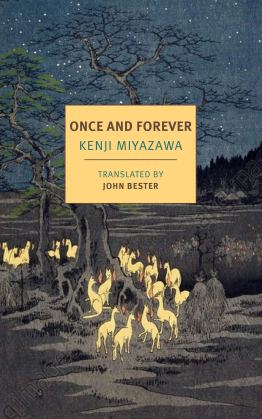 The month of May is also a slow one. A slow reading month. But this one was worth the time spent on it. Two dozen tales of joy, innocence, whimsical, sometimes tragic – but all deeply rooted to Japanese folklore and connected to the flora and fauna of the land.

Miyazawa takes you through a range of emotions with these tales. Whether it is the cautionary tale of “The Restaurant of Many Orders” to the heartlessness of “The Spider, the Slug, and the Raccoon”, Miyazawa had me enthralled and wanting more with every turn of the page.

I don’t think I’ve read something like these tales before. It isn’t about them being magical. But it is about holding your own as well in the face of the traditional ways of life. Most tales are also drawn from Buddhism which I loved. For instance, “A Stem of Lillies” which does incorporate the many images from the Lotus Sutra.

Once and Forever is a book that will stay for me for a long time. It is so underrated and I’m glad that New York Review Books decided to publish these tales. Read it. Lay your hands on it.

It’s your birth anniversary and I’m grateful that you were born. I’m overjoyed that you lived, experienced what you experienced, loved the way you loved, made your mistakes, and took them all and wrote your books. Your books people say are rooted in magic. I think they are rooted in harsh reality, which you sugar-coated for us. So, thank you for that as well. There won’t be more books from you. I’m aware. It’s been a while now. But I am happy that I get to reread all that you wrote. No one else could write like you Gabo. No one else can. They try. But you are you, and you know that. One hundred years of solitude made me dream in technicolor, Márquezda and you should know that. Of love and other demons brought me closer to my ex-boyfriend and he left me when your autobiography was released. It’s been a long time since then. I remember not liking love in the time of cholera. Sorry for that. I still don’t. But I read it. Your stories have a life of their own, and you know that. I write to you because I love you. I write to you to let you know that you made a fifteen year-old boy dream when he was lost and confused. You made me see my Macondo. You made me live my reality and taught me how to face it. I remember reading Leaf Storm at 15 and being fascinated by it. I wanted to write you a letter. I always did. Never thought it would be when you were in a Macondo of your own. I hope the siestas are long. I hope you are still writing. I hope you are dreaming for all of us. I hope you’re happy. I also want to gift you something if it means something. I will read a book of yours every month. Reread most of them. Till I’m done. And perhaps start all over again. Gabo, you made a generation hopeful of love. You made them see magic. You made them escape. You made them live. Thank you. A thousand times.

If you feel like reading the quintessential twentieth-century autobiography, then this is it. You just have to read The Kindness of Strangers by Salka Viertel. It is everything I expect from an autobiography and it delivers down to the last page. Viertel’s life was not only interesting but also lived variedly and maybe that’s the reason the book shines the way it does. It is almost a pilgrimage of one woman through the twentieth century’s darkest times and also a chronicle of the good times. I could easily classify The Kindness of Strangers as an epic read, mainly because of its sheer expanse.

The Kindness of Strangers is the journey of a woman. It is the journey of a century – all rolled into one – from a province in the Austro-Hungarian empire to Hollywood. Viertel’s book is unique in the sense that it doesn’t try and pack everything in one chapter or paragraph. It takes its time talking about people, events, and their impact. Normally, I have observed myself getting bored of such autobiographies that start right from childhood and unfold against a backdrop of larger events. That wasn’t the case with The Kindness of Strangers. I enjoyed the read and that of course had a lot to do with the writing.

Of course this isn’t an easy read, in the sense of the turn of events – from the First World War to the Second and incidents that are recalled from memory, Salka Viertel’s writing is too detailed. Sometimes that works wonders for the reader and sometimes it is too much trivia. However, it made me think about how should an autobiography be written at all then? Is there a template? Should there be one? I don’t think so though. The Kindness of Strangers as any good autobiography merges the personal and political perfectly. For instance, her concern over her children’s safety during WWII or her time as an actress in Europe to her time in Hollywood and how that merged with political opinions of many is a delight to read.

There is a lot going on in the book and I was only too glad to see timelines so as not to miss the drift of what is being said. I had no clue of who Viertel was till I started reading her memoir. The relationship with her parents, the rebellion, the relationship she shared with her sister Rose, and most importantly leading the life she wanted to. The sense of loss of innocence is spread throughout the book. Nostalgia plays such an important role – not only in its conjuring but also it feels like it is not a thing of the past at all.

My favourite part of the memoir is Salka’s later life, spent in America, where she worked in Hollywood, made friends with Greta Garbo, became an American citizen as well, and helped many artists find homes – the ones who escaped Hitler’s clutches so to say. There are these lost worlds constantly at play of which the reader is privy to. The writing while gives a sense of staying on some details a little longer, still feels hurried. I wish for some parts there was more.

The Kindness of Strangers is full of life and joy. It is also full of instances that demand attention and empathy. It is the kind of book that talks about relationships – the constancy of them and the passing on of most. Ultimately, it is the book that makes us see our follies as humans and also the kindness we are ultimately capable of which sometimes we do not know of ourselves. 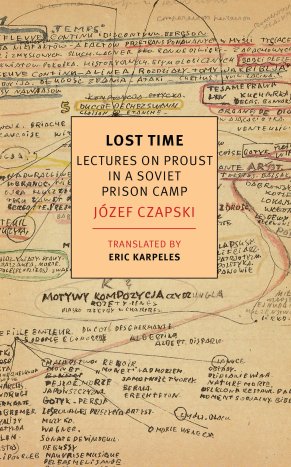 Off-late, I have been reading a lot about memory and the passage of time and that has happened quite organically. There is no planned reading list around it. It just happened by the by and one of those books happened to be Lost Time: Lectures on Proust in a Soviet Camp by Józef Czapski.

The concept of suffering isn’t new to humans. We have been suffering one way or the other – in one situation or the other for decades and centuries. Of course, a certain group of people suffer more at any given point, but again that’s not the point here. The point is resilience in the face of suffering, in the face of the unknown, to not have any idea of what will happen to you. What do you do then?

Lost Time is a book of lectures given by Czapski when he was a prisoner of war during the Second World War in a Soviet camp, as the title suggests. We Tell Ourselves Stories in Order to Live, said Joan Didion in The White Album and it couldn’t be truer. Don’t we all at some level tell stories in order to survive? Whether it is merely surviving the mundane day after day or when we are caught in an extraordinary situation like Scheherazade’s?

These lectures brought Proust’s In Search of Lost Time to life for prison inmates. This slim volume is a collection of some of those lectures that Czapski gave, depending solely on memory (so befitting to Proust) – sketching characters, places, and time, thereby evoking so many emotions on the spectrum within the inmates. Also, it is so strange to be talking of Proust in a prison camp – the volumes of aristocracy, elegance, and grace – only to prove that Proust can be felt by all.

At the same time, what I love about this book is that it is an easy read. Czapski made Proust accessible – and perhaps may even encourage you to read Proust once you are done reading Lost Time. You don’t need to read it first. Also, Proust in Gulag – does it seem to say a lot about the human condition and how we are as a species? Czapski’s love for the master is evident – through every speech – he merges Proust’s life with the six volumes and that to me is magnificent. I just wish this book were longer. I wish there were more speeches. A definite must-read. For Proust lovers and the non-lovers as well. 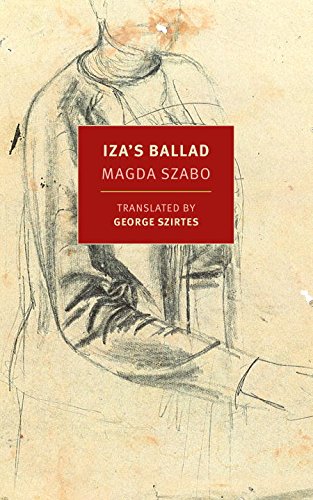 I haven’t read too many books about mothers and daughters. I am sure there a lot of them out there but I haven’t been able to cover that territory the way I have been wanting to. Every relationship when it comes to a parent gets a little complex. There are always disagreements for sure, but we don’t realize when it leads to becoming a dysfunctional relationship from an accommodating one. It happens too fast, too soon. Families are like that I suppose and a lot of writers have written and continue to write about it. I was floored by Szabo’s earlier work “The Door” – again the relationship between two women, so I knew what I was getting into and boy was I not disappointed by it!

“Iza’s Ballad” is about Ettie – the old mother from an older world. Her daughter Iza as expected is from the modern world, with thoughts that are not aligned to those of her mother’s. Ettie is recently widowed and goes to live with Iza (who is now a doctor) in Budapest. Ettie was born and brought up without a formal education and came from a poor background. However, she ensured her daughter was well-educated and did not want for anything. Her husband Vince was a magistrate and Iza has taken after him. Ettie cannot get used to Iza’s way of living. Iza on the other hand has stopped being answerable to anyone. The traditional and the modern clash just as they did in “The Door”.

Szabo’s writing is not easy. It takes some time to get into but the translation by George Szirtes is spot on to the last detail. The reason I say this without knowing a word of Hungarian is the nuances, metaphors and folk references aren’t lost at all on the English reader. To me that is some good enough criteria of a great translation. Also, being a man he gets the intricacies of a mother-daughter relationship beautifully and only too accurately.

The concept is universal and hence almost every reader can relate to it. Szabo doesn’t waste her words and that is quite evident. In fact, in so many places, she doesn’t try too hard telling the reader, but just shows and leaves and that’s how a good book should be. “Iza’s Ballad” is an emotional ride and yet restrained – balancing the old and the new, the relationship dynamics and above all love and its transformation.