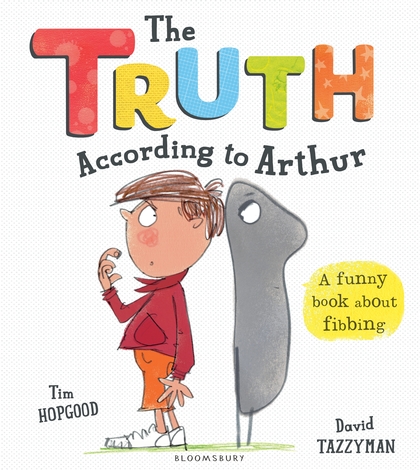 Picture books are adorable. Well most of them are. Right from Dr. Seuss to Oliver Jeffers, in my opinion, they would do more good for adults than children. We can all learn a lesson or two from picture books – how to be calm, grounded, more patient and also live the moment as it comes our way. They also teach us a lot about basic life lessons and how we can live – one day at a time.

One such picture book I read was “The Truth According to Arthur” by Tim Hopgood and illustrated by David Tazzyman. The book is about Arthur, fibbing and telling the truth about ramming his brother’s bicycle to his mom’s car and the dent it caused. Truth is a grey, oblong being in the background, waiting to see what Arthur will say or do now.

The book is simple, funny and Arthur’s various versions of the truth will have you in splits. I absolutely enjoyed this book. Picture books do that to me. They bring out the child once a while and that is a good thing. The illustrations by David Tazzyman are adorable and simple. I think it is the simplicity that makes you want to ponder and look at the illustrations again and again. They make you see things differently – a child’s view after all is not easy to adopt. We forget that we need more books such as these to balance our lives and make it better.

Now I am a great fan of historical fiction but have been a bit averse to the genre because most tell the stories of kings, princesses, and prostitutes with very campy romantic plots that have been recycled and overused to the point of it being absolutely unbearable to those who are looking for a bit more variety in their historical fictions.

Well with Karen Maitland’s Company of Liars, I’ve at last found a book that I simply cannot recommend highly enough.

This novel is completely driven by enigmatic and likable characters (enough with the prostitute with the heart of gold bit!). Needless to say, nobody gets embroiled in a passionate and forbidden love affair, nor are there prostitutes to be delivered into the arms of merry monarchs after a life of misery and suffering. Instead, readers are transported to 14th century England to the time of the Black Plague as nine desperate strangers attempt to escape death as it inexorably surrounds them. We follow this group of strangers across their travels throughout countrysides and villages as the readers truly get a sense of the time and period as lived by people gripped by the plague (Ain’t that refreshing? A historical period not described through the eyes of a princess or prostitute but just ordinary, simple folk). Truly, what made this book a true gem are the characters. We have nine strangers with distinct and believable personas (yes there is a young girl who can seemingly predict the future but this trait only adds to the unexpected ‘creepy’ factor in this novel as she is not your average ‘helpless, young, blonde peasant’) and the mix of the bunch as the plot twists and turns is what makes this a real page-turner.

Additionally, it was hard to say where the story was gonna go. All we are given at the beginning is that this rag-tag group is trying to escape the plague…. and as you read on you genuinely do start to care about each character (even the horrid, nasty one(s)). As one gets absorbed with the struggles that the group of travellers face, readers also become familiar with each character bit by bit. A process that I truly relished and enjoyed as Maitland writes ever so vividly but without exaggeration. The dialogue between characters and description of settings are very readable- Maitland is very straight-forward with her words without feeling the need to romanticize every paragraph.

However you do have to ask yourself why you would want to read a book set in this time period? Is it to learn more about the plague? Or is it to get absorbed in a wonderful fictional story contained in such a setting. Some reviewers did not like this book because of a historical factual slip or two but really it is the characters and their story within the backdrop of the plague that makes this book a winner. Who cares if one little event mentioned in passing by the author didn’t actually happen when the author said it did? It had zero consequences on the plot and lives of the characters. There are more exciting and unsettling things going on with the story to be bothered by an inconsequential slip.

However a word of caution: As one settles into the story, the reader must not forget what this book is called: COMPANY OF LIARS…. yes, and when a story is this good with characters so well written- I almost forgot that there is plenty of deception going on, but what about and why? For the most part we have the leader of the group doing most of the narration- a very likable central figure… and as he tells the story and others in the group tell theirs as well, it is a little bit unnerving and quite the psychological delight to try and guess what the lies being told are and for what purpose? As soon as you decide which characters you like and which you don’t…. and the creepy little girl starts to give hints as to what may be going on…. and a single sentence gives you a hint that a character you adore may not be what he seems…. it’s this VERY SUBTLE and yet ensnaring mind-game that makes this book a must-read and a page-turner in every sense of the word.