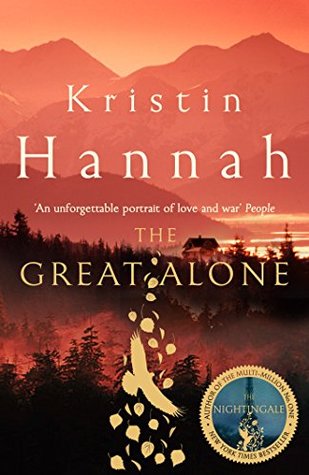 The Great Alone is a story of wilderness and survival. I also think to a large extent it is the story of what it takes to rebuild and reconstruct life amidst tragedy (seemingly) and secrets (intentionally kept). This enough should get you to read this book. However, I shall tell you more so you do for sure read this one.

“The Great Alone” begins with Ernt Allbright dragging his wife, Cora and his daughter, Leni into a wilderness experience to Alaska to run away from his demons. Ernt has come home from the Vietnam War – a changed and hostile man. His daughter is thirteen and on the brink of adolescence. She is caught in her parents’ tumultous relationship and only wants some peace of mind. Mother and daughter will both follow the man wherever he takes them. They just want a new beginning.

In all of this, is Alaska. The daunting land, the unknown terrain that they enter and as winter approaches they realize that things aren’t what they thought it would be. Hannah’s writing seems simple initially, but as the layers run deep, it becomes complex. Not that any of it isn’t readable but there is so much going on that you have to pause and think about what you just read.

Alaska in itself is a major character. The bleakness, the winter and the darkness, coupled with Ernt’s fragile mental state, Lena and Cora are locked in for eighteen hours in their small cabin. The action has only begun. The terrors from within show up and that’s where I will not say anything more and wait for you to read the book.

Hannah’s writing is terrifying in this one. “The Nightingale” was a relatively tender book. “The Great Alone” demands writing (which the author delivers) that explores the dark recesses of the mind, the heart and the soul. It is a story of immense loss and how to perhaps recover or not from it. Kristin Hannah does a stupendous job of exploring emotions – the dark side and the ones in the light and what happens when the two merge. I would highly recommend this title.