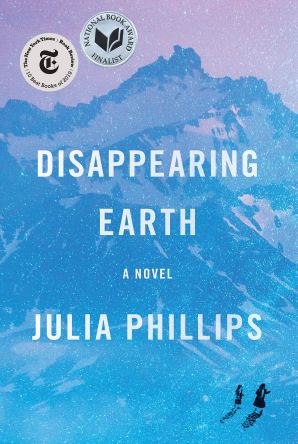 Disappearing Earth is a book that will keep you on the edge of the seat, and yet make you constantly stop and think about so many things that go on in our world, which no one seems to know of. At the start of the book, two young sisters (ages, eight and eleven) are kidnapped in broad daylight from the Kamchatka Peninsula in the far east region of Russia. This is how the story begins.

So, while the disappeared girls are the crux of the story, there are other characters that come right after the first chapter, describing how it all happened, and what was the context (well, in a way). We get to know the characters’ lives and their relationship with the sisters, each character describing their own pain and vulnerability. These characters are mostly women, who are leading quiet lives, each suffering in their own way. This is how Phillips opens up the world of this novel for the reader. It is not what it seems and there is so much more to know.

The writing may seem wobbly at first, but it soon picks up, and gives the reader so much more. Kamchatka has its own role to play (given climate change), but ultimately the book is about the fragility of humans and how the ever-changing ecosystem has such a role to play with their psychology. You can sense it all – the dense forests, the expanse of tundra, the glassy seas, the volcanoes, all of it and more, which only add to the complexity of the narrative.

Phillips shows us the mirror of community, and what happens when you cannot trust what you have been born and raised in. The sense of family runs strong in this novel. The writing is sometimes all tell and very little show, but it worked for me just superbly. I would strongly recommend this read.