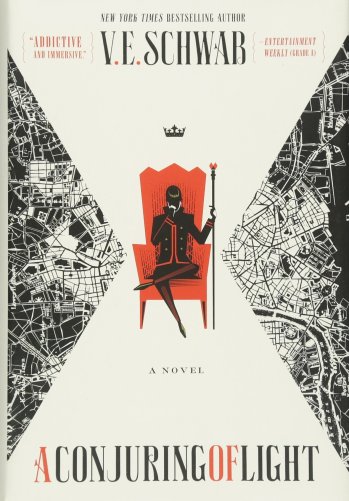 And now to the last book in the Shades of Magic trilogy by V.E. Schwab, “A Conjuring of Light”. I was so taken in by the earlier two books that I had to read this one soon after I had finished the second one. The balance of Four Londons is clearly at stake in this one, after the black power rises so to say.

Might I also add, that contrary to popular opinion, this was my favourite book in the series, even though it was nothing short of a tome at six hundred plus pages. Just that the characters of Kell and Lila were fully developed in this one and you could so clearly see different shades to them, that I couldn’t help but hoot for the writing.

So here is a brief summary of the plot: An ancient enemy returns to claim a city, as a fallen hero tries very hard to save a kingdom, almost in ruins. And then there is the twist of Lila knowing magic but she doesn’t know how to control it. This is the part of the book that I loved the most. Schwab clearly knows how to spin a tale by bringing in a surprise element and enthralling the reader with it.

The entire excitement of four Londons being involved and equally so in the plot makes this one racier and almost on the edge of your seat fantasy thriller, so to speak. Yes, the writing seems dull in some places, but that was only a minor hindrance as far as I am concerned, given how much I enjoyed reading this one. Schwab clearly has ended the trilogy with precision, closed all open angles to the plot and has given us characters that I certainly would like to know more of, if there is a spin-off series, one which I am most certainly hooting for.

After I finished reading, “A Darker Shade of Magic” I knew I wouldn’t be at peace till I finished the second and third parts of the trilogy and I did just that. I ate my way through the other two parts and was so not disappointed by them or by the end (which most people were by the way). A Gathering of Shadows is the second part of the trilogy and a lot has happened since the end of Book 1 (I will not give away any spoilers. Don’t worry). But how do I speak of this book without giving away something? I shall try not to.

The King and the Queen are not very pleased with Kell for something he did in Book One (You really must read the first book to find out what). But what I can say is that just like Hunger Games and the Games in Harry Potter, there is also something known as the Element Games introduced in this book, which is an important magical competition and everyone’s focus turns to it. While in another London, something dark and sinister is brewing.

The writing is as taut as ever but I was expecting more from this book. However, she did fulfill that wish in the third book (which I will review tomorrow). New characters were introduced in this one and the old ones stayed (some whom I loved and some not so much). Also, the relationship between Kell and Rhy was expanded in this one which I could not get enough of. The camaraderie between them is just superb.

“A Gathering of Shadows” is a fitting sequel to the series and I am glad I read it in a row after “A Darker Shade of Magic”, soon followed by the final part of the trilogy, “A Conjuring of Light”. A brilliant series in my opinion.