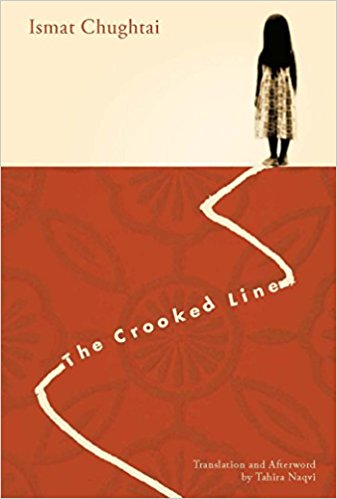 When I got to know of Women in Translation month toward the end of July, I knew that Chughtai would have to be one of the authors that I would read. Chughtai is something else. I can never use the past tense for her, because she lives on and on and on through her works no matter how cheesy it might sound to you. I recall the first time I had heard of that name and most people in my college only associated her with “Lihaaf”, her most popular short-story on love between women. But there is a sea of work that Chughtai wrote and while most of it is fairly popular, it isn’t as famous as her short stories. Her novellas, novels and even her memoir, Kagaji Hai Pairahan (loosely translated to a life of words) are stunning. Everything she wrote will go down in history.

My relationship with Chughtai’s works is of fierceness. I always associate the word fierce with her and her heroines. Their inner lives as captured by her remain as probing and mysterious as they were when first published. There is no recipe for emancipation in her books. Her heroines don’t try to break free from their worlds in ways which are extreme, but work around them. I don’t mean this as a good or a bad thing, it is just how things were then, when Ismat Appa was growing and observing the world of women around her.

“Tehri Lakeer” one of Chughtai’s most autobiographical work (translated wondrously by Tahira Naqvi as “The Crooked Line) tells the story of Shamman and her world, the women in her family – from her mother to her sisters and cousins, to her time at a boarding school and experiences there and how she grows into a woman on the brink of India’s independence, at the same time fighting her inner battles. “The Crooked Line” is about Indian women living in purdah (the world Shamman is born and grows into in the first part of the book) – her Amma who is callous enough to let Shamman being taken care of by her sisters. Her Bari Appa (oldest sister) who is a premature widow and uses this to her advantage time and again in the family. Her cousin Noori who very early on understands how to wield power over men. Chughtai’s characters may appear weak and subdued but don’t be fooled. They are strong and yet know when to appear weak.

The world of purdah disappears as Shamman grows up, with its own set of rules and it all comes down to how women control men around them. Shamman, now educated sees herself different from her family and is almost alienated by them. She doesn’t even understand her place in the modern world and is somewhat stuck in a limbo. Ismat Chughtai’s characters are also known to traverse paths of identity confusion more often than not. Be it Masooma (from the novel of the same name) or even Bichchoo Phoophee, they are always stuck, always searching and breaking paradigms in their small ways. Shamman does the same and is seeing the world change drastically – be it through her friend Alma, who has a child out of wedlock and is unable to love it fully or abort it – or through Bilqees, the femme fatale who uses men and is always surrounded by them, without knowing if she loves them or is just using them.

This is also a constant in the book – women who are neither here nor there. Women who were in purdah had no control and women who have the freedom don’t know what to make of it. In all of this is Shamman’s role as a headmistress (which reminded me so much of the Brontë sisters) and her relationship with the gossiping colleagues to her own sexuality as and when it blossoms, Chughtai’s feminism is not contained or a listicle of sorts. It is the kind of feminism that questions and makes you very uncomfortable while asking those questions. She isn’t apologetic and neither are her characters. Tahira Naqvi’s translation from the Urdu is top-notch as she keeps all phrases and words intact, where they should be. There is also a glossary behind for those who might need to refer it. This was perhaps the last Chugtai book that I had left to read. Knowing me though, I will go back to her works, almost every year. She was truly a woman of gumption and it reflected in her writing all the way. Read her. Breathe her works. And I would be very envious of you, if you haven’t read her at all, because there is so much there for you to read and adore.

For the longest time, I avoided reading Outline. I don’t know why but there was this mental block surrounding it that of course broke the minute I started reading it. From then on I couldn’t turn back. I had to finish this book and yet hope it wouldn’t get over. Having said that, Outline also isn’t everyone’s cup of tea. That is just because of the writing – it takes some time to sink into and before you know it, it has already started growing on you.

“Outline” is a story of ten conversations – ten different plot lines, ten lives and a woman at the core of it. The story is of a novelist and the people she meets, the stories she gathers, what people confide in her and tell her – their hopes, regrets, fantasies, anxieties and longings. It is all about life from a vantage point come to think of it. The crux though lies in the novelist’s own life – her losses and gains and how she comes to terms with all of it.

The execution of the book is brilliant. The ideas are stupendous -the fact that all of them find their way and space in the book says a lot about the author’s craft. Cusk’s writing style may seem random at times but it isn’t. Cusk makes you see the world bit by bit, layer by layer, as if an orange is being peeled. She doesn’t jump into incidents or facts of people’s lives. She takes time to introduce them to the reader and the reader is then taking his or her time getting familiar with them. The human details are spread out beautifully over ten lives and the narrator’s of course, that you only end up in awe at the end of this wondrous read.