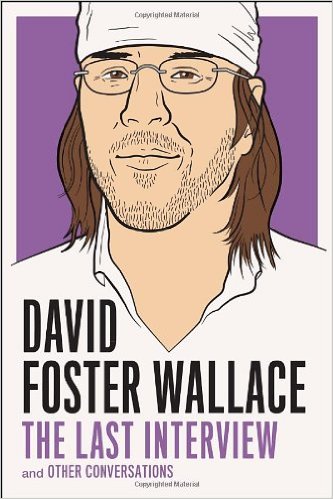 There is something about David Foster Wallace that you cannot help but want to know more. He was barely forty-six when he committed suicide on September 12, 2008. He had suffered from depression for nearly twenty years and perhaps this was the reason he took his life. At the same time, you know what they say about geniuses, right? There has to be a spot of bother in them – they view the world quite differently from you and I and mostly most of them tend to veer off-course and live life on their terms, though not always to the best of the endings.

The Last Interview and Other Conservations is a wonderful concept introduced by Melville House Publishing. The series features a lot of writers and their last interviews – from Bradbury to Marquez to Vonnegut even, also Hemingway if you please. I have read most of them and then I decided it was the turn of David Foster Wallace. In these brief interviews, you will get a strong sense of the man and more importantly of the writer. Wallace seems so elusive – it’s almost like there is so much going on inside his head and you don’t have access to all of it – that is kind of frustrating but extremely interesting.

His views on things everything modern, political and technological is hilarious and often melancholic as well. Every individual interview in this collection brings another side to the writer and more so his works. At the same time, there is this overwhelming sense of gloom which pervades DFW and his works – one cannot seem to shake that off for sure, and that is more evident in these last set of conversations. I honestly feel that if you want to know more about the man, after reading some of his books, then this is the best place to start.