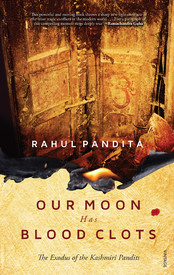 Being displaced from your roots is the worst event ever that could happen to anyone. It happens all the time in our country, right from Partition. I remember my grandmother telling us stories of her life in Pakistan and how the partition affected their lives. The lives they had to leave behind and start anew in a strange country where acceptance and people looked at our clan or community very suspiciously. After all, our ways were different. The way we thought and the way we behaved. Today, of course things are better for Sindhis in the country, however the same cannot be said for the Kashmiri Pandits and this review is about them and for them, given the book, “Our Moon Has Blood Clots: The Exodus of the Kashmiri Pandits” by Rahul Pandita.

I wanted to read this book from a human angle and that is exactly what I did. To me, the politics did not matter. What mattered most were the stories chronicled in this book, from what Rahul has experienced firsthand (being a Kashmiri Pandit himself) to the stories as told to him by the others. Sometimes you have to take what it does to read a book of this nature – where there are no happy endings and no rosy scenes, where everything is the way it is in life – raw and unrelenting. Where people are thrown into circumstances that they do not want to be a part of and yet are, tolerating some atrocities and only praying that it all goes away for the others. That is the power of living through it all. Rahul Pandita talks about the Kashmiri Pandit exodus that occurred as a result of the so-called ethnic cleansing (violent in nature but obviously) backed by the Islamist militants. This continues to take place even today. Kashmiri Pandits, the Hindu minority amidst the Muslim majority Kashmir, did not stand a chance. On one hand it was this and on the other it was the demand for a separate Kashmir and so-called independence that led to their state of misery and alienation.

Home cannot be defined by any other word. Home remains home and does not change. Rahul Pandita later in the book talks of what identity means, what is “home” and how nothing in the world can change his idea of place and belonging. The story of Kashmiri Pandits has almost been forgotten by now. No one seems to talk about it, so that is when a book like this makes a lot of sense. The writing is as is – there are no frills and nothing is sugar coated. It is almost investigative journalistic writing and at the same time it is deeply embedded in emotions and sentiments. At some point, the book does make for difficult reading. The conditions the refugees lived in is heart wrenching, however like I said, that is how it is.

There is so much that the book delves on and at the same time, Pandita also talks of the way the valley was before the exodus. To some extent he makes it sound so perfect, that one would want to believe that it was that way, however we all know better than that. What I liked the most about the book was that there were no sides taken and one cannot given the nature and content of the book, and at the same time, I could not help but feel opinionated or biased towards the events and the way it all turned out for the Kashmiri Pandits. The title also was so striking and fit beautifully to the rest of the book. I will recommend this book only if you can stomach the truth or else this read is not for you.

Buy Our Moon has Blood Clots: The Exodus of the Kashmiri Pandits from Flipkart.com