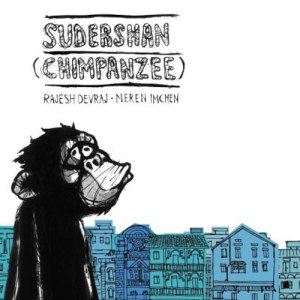 The Indian Graphic Novel has come a long way – from only Sarnath Banerjee ruling the roost at one point, the genre is slowly being added on to by other cartoonists/creators. It is surprising to note how the category is growing day by day and writer by writer. The graphic novel that I just finished reading yesterday was, “Sudershan (Chimpanzee), written by Rajesh Devraj and illustrated by Meren Imchen.

“Sudershan (Chimpanzee)” is as the title suggests, about a chimpanzee. So what makes it any different? What makes it different is that the story is set around B-grade Bollywood film industry, in times when animals were at the center of the story. I definitely remember such movies being released in the 80s, where there was the famous Moti (the dog) or an elephant that would kill the villain or the snake that would feature in every serpent film. That is exactly how the way it was.

The book cleverly tells the tale of a chimpanzee who was once a superstar in the industry and his journey from becoming a superstar to his downfall and what redeems him at the end of it all. I did not find the book extraordinary; however I did laugh in most places and also empathized with Sudershan’s situations – right from becoming popular to becoming nobody. At a point, I also thought that maybe the “chimpanzee” is just a metaphor for human beings caught in their lives; however I don’t think it was intended.

The writing was sparse as it should be in case of graphic novels. The illustrations spoke for most of the book, which I loved the most. They are in black and white and almost roughly done which adds to the element and character of the book. “Sudershan (Chimpanzee)” is almost ironic and at the same time it is a funny read in places. It is not as great as the other graphic novels which I have read in the past, however it is worth a read for its uniqueness of plot and illustrations.