One thing is for sure. I have absolutely loved reading The Wildings by Nilanjana Roy and it happens to be one of the best books I have read this year. So there was no choice but to interview Nilanjana Roy and know more about how the book came about, about the endearing cats, her literary inspirations and more…

So here goes my interview with Nilanjana Roy…

It’s been an extraordinary few years for books with animal characters–in a more literary vein, there are Rajesh Parameswaran’s stories about remorseful tigers, Tania James on chimpanzees. For me, writing about cats came out of watching them, and realising that Nizamuddin, Delhi and most cities we think of as “human” are actually home to so many other species. TC Boyle has an interesting question: “How are we as an animal species distinct from other unintellectual species?” and part of the fun of The Wildings came from trying to imagine the secret lives of cats.

2. I wish the cats speak to me. Do they speak with you?

This morning, Tiglath (my oldest cat), brought me a feather and his meaning was very clear: “I have brought you gifts. Now you must cuddle me until your arm goes numb.” If you read Dian Fossey on gorillas, or Lawrence Anthony on elephants, they come to an understanding that humans have to work harder to “translate” animal communication, which very often happen non-verbally.

In The Wildings, the cats speak via whisker transmission, but I had to cut out an earlier description of how they
used scent, sprays and markings as a kind of bush telegraph. I think it’s true–they use smells almost as language–but it’s hard to get down in a book without sounding completely insane.

As an aside–when Lawrence Anthony died, herds of wild elephants journeyed for 12 hours to reach his home. They stayed
there for a week or so, apparently mourning him, and then they left. The question for humans was: how did they know? But they did, clearly.

3. What prompted you to write this book?

I’d spent years as a journalist, quite happy with that kind of work. But in journalism, you always write for other people; fiction forces you to ask what’s important to you, not to anyone else. For me, it turned out to be following the real Mara, who spent 12 indelible years with me and my husband, and who opened up this world. Not just the world of a cat in a house, surrounded by Bigfeet, but the outside world of cheels, dogs, langurs, animals who live in a universe shaped by one species–us. In the end, it doesn’t matter whether you’re writing about humans or cats or little green aliens: you write about what you love, and whatever sets all of your imagination on fire.

This came as a surprise to me because I cut my teeth on literary fiction, but even there, the pattern is clear-Borges, Cortazar, Garcia Marquez, Annie Proulx. All the collectors of strangeness.

Nilanjana reading from “The Wildings”

Ask me this after I’ve got a few books down, I’m just learning how to write!

There were the books and the reading, but in truth, most of the research was done on two feet, walking around Delhi. I don’t know why so many writers seem to need to walk for hours, or do the Murakami running thing: perhaps it’s building the physical stamina you need if you’re going to write for six hours at a stretch, perhaps it’s just that walking slows you down enough for you to notice how the world really works and fits together, as opposed to how you think it works. Someone went to Nizamuddin, where The Wildings is set, and told me, “But there were no cats there!” and I thought, but you have to walk around for a while, let them get used to you sitting in the park quietly, watch them go by under, not over, the canal bridge.

7. The Wildings had moments where I would choke up. Did that happen to you while you were writing the book?

Of course not, I was ruthlessly dry-eyed and stoic all the way through.

Oh, all right. There was one scene in particular–I think you know the one I mean–where I cried my eyes out. The thing is, my partner–who loves animals himself–understood perfectly. He treated the tragedy on the page as a real tragedy, which is very comforting. He never made the mistake of saying, “That character you’re crying about? You know she’s not real, right?” Of course I knew she wasn’t real, I’d made her up. But in that moment, she was real, and so was the sadness I felt.

8. What is the sequel going to be about? Maybe you could give us just a sneak into it?

Mara and Southpaw, the two cats who are tiny when we meet them in The Wildings, are growing up, and it’s a hard growing up for both of them. Mara has to make a choice, decide whether her loyalties lie with her Bigfeet or with the clan. And Nizamuddin has changed by the time we see the cats next; it’s not as gentle a neighbourhood. Southpaw has a lot to handle and some very hard choices to make–I hope he’ll make the right ones, but we’ll see.

That’s the end of the interview. You can read my review of the book here.

I for one cannot wait for the sequel to be out. So looking forward to it. 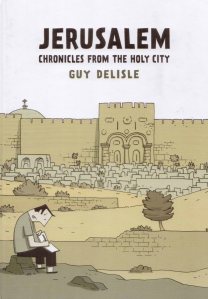 Graphic novels always make it easier for a story to tell what it has to. They have the sense of making the reader understand what it wants to without putting in too much effort. Maybe that is why I understand politics best through a comic strip. That works for me on more than one level.

“Jerusalem: Chronicles from the Holy City” by Guy Delisle is one such book. Before reading the book, I was aware to some extent about the Israeli/Palestinian conflict, but things became clearer, but obviously after the read.

Guy Delisle presents the conflict in a manner that I think a non-fiction account wouldn’t have been able to. This is not a typical travelogue either (though it is his account of travel to Jerusalem). The book is about Delisle’s wife, Nadege who works with the organization Doctors without Borders and she is transferred to Jerusalem for a year with Guy and their two children to help provide medical care in Israel. The book is a collection of the author’s observations of the city on a day-to-day living basis.

The narrative switches from bigger events to the daily living of the author and his family, which works very well with this kind of graphic format. There are no sides that Guy takes in the book. He just presents his observations – the keen eye for details – from Israel’s assault on Gaza to the Arab-Israelis issue. The book surprisingly is not controversial at all. As I said, Guy leaves the judgment and decision-making to the readers. He does not do it for them.

The reader gets to understand and notice just how bizarre Jerusalem is. The city is divided into different quarters – Jewish, Christian, and Muslim, each with their own rules and regulations. The military presence cannot be ignored. The check points are now a part of the citizens’ lives. The region is troubled and Guy infuses life and sometimes humour through his drawings and writing which is much needed for a book of this magnitude. A great read for all those who want to know more about this region and to a certain extent about its history.

Buy Jerusalem: Chronicles from the Holy City from Flipkart.com