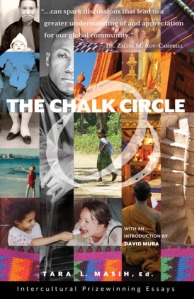 I never thought I would enjoy a collection of essays that much. I had read Tara’s collection of short stories earlier and was immensely impressed by it. The collection was varied and simply written and that’s what I have loved about her essays as well. Though the essays since written on multi-cultures and races; tend to get a little intense, however they are brilliantly penned by various writers.

Global communities need to be understood more today than ever. The need is not to be tolerant but to be aware of differences and may be at some level embrace them than shunning without a thought.

“The Chalk Circle” by Tara L. Masih (editor) is one such attempt to bring communities together and work on understanding them. The essays are prize-winning pieces and written by various people from various backgrounds to be able to build the barrier between races and thought processes. This collection is a result of a call, the editor put out in 2007, for Intercultural Essays dealing with subjects of “culture, race, and a sense of place”.

The sense of place is very strong in the book – for instance when I read, “Finding Center” and “Connections”, I could not help but wonder about Home and what does it take to call it that. What makes culture? What is the spirit behind it? Is there anything more to it than people? Identity plays a major role in these essays.

The book is divided into the following sections: The Chalk Circle: Identity, Home and Borderlands, As I Am: Letters of Identity, The Tongue of War: A Clash of Cultures, The Tragedy of the Color Line, Eyewitness: As seen by another, The Other and the Culture of Self and Spirit. Each essay is written with a lot of life and magnanimity. It is the emotions lying at the surface – what if things had been different, what if circumstances were to change, and what if identity was as clear as most things in life.

Each essay is a story that opens to the life of the writer, the theme being the same – sometimes displacement, and sometimes loss of a voice. The writing is varied, after all as the case normally is in a collection.

It isn’t easy compiling a collection of this nature. Tara L. Masih as an editor has done a fantastic job using keen insight and not being biased while selecting the essays from a lot of them that appeared for the contest. After finishing, The Chalk Circle, I could make sense of culture, race and a sense of place, in a way evolved manner than I did earlier.