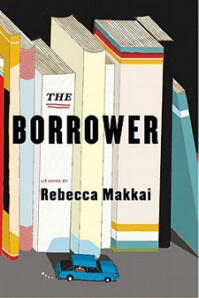 “I might be the villain of this story. Even now, it’s hard to tell.” So begins Rebecca Makkai’s enchanting debut novel ‘The Borrower’ which tells the story of Lucy Hull, a small-town librarian who inadvertently ‘borrows’ a child and takes him on a road trip which turns into a journey of discovery for them both.

And yes it is hard to tell whether Lucy is the villain or hero of this story. The child in question, Ian, is an alarming precocious, engagingly nerdy boy who hails from a right-wing religious family and finds solace amongst the stories found in the library (just not the ones his mother allows him to read). His parents are sending him to classes run by the sinister ‘Pastor Bob’, a dodgy evangelist who claims to be able to ‘cure’ children with homosexual tendencies, so when Lucy discovers that Ian has been camping out (no pun intended) in the library one night, she allows herself to be persuaded to take him to his grandmother’s house. However, it soon becomes obvious that Ian is sending her on a wild goose chase.

There are times when you want to shake Lucy but undoubtedly her heart is in the right place. Like any good liberal bankrolled by Daddy (a cruel way of putting it but nevertheless true), she is shocked to the core by the thought of her studious, unconventional and emotionally manipulative young charge being sent to classes to reprogramme his sexual orientation. But is she any better – so certain of the moral high ground that she’s prepared to usurp his parents as the controller of his life?

Makkai fills the book with all sorts of literary references, from Lolita and Crime & Punishment, to Goodnight Moon and If You Give a Mouse a Cookie. Fans of children’s literature will be particularly delighted by the little gifts that Makkai includes throughout her prose. (My favorite: the nod to the Choose Your Own Adventure books – loved it!)

This book is very funny, as well as thought-provoking. It certainly gives conservatives a tough time but it doesn’t let liberals off lightly, either. Lucy winds up doing a lot of soul-searching as she realises that her own ideological position also has its nasty side, and that we all tell stories about our past in order to make excuses for our moral blind spots. Tolerance goes both ways, and regrettably includes acknowledging the right of parents to raise their children as they see fit. The extremely unrealiable narrative of Lucy’s own Russian emigree father is an interesting subplot in its own right and an excellent foil to the primary story. To say this very entertaining novel is a commentry on the culture wars that are presently tearing America apart makes it sound a lot heavier and worthier than it really is. It’s the mark of a skilled writer when they can introduce such complex and serious themes with a light touch and keep you reading and caring about the characters throughout.

Buy The Borrower from Flipkart.com

The Borrower: A Novel