I have not read “The Storyteller’s Tale” by Omair Ahmad, but now I will. I have just finished reading, “Jimmy the Terrorist” and I am still thinking about it. I have had a great year of reading. 2010 has been perfect and it just got better with this book added to my reads this year.  Terrorism has always and sadly enough will always be an intricate part of our lives. Off late, it has seized us with fear and everything that comes with it – the insecurity, the deep down scare in people’s eyes about what is going to happen tomorrow and threats from almost every religious fundamentalist group. 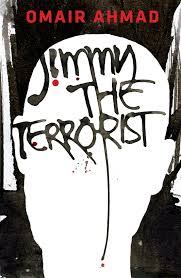 Jimmy the Terrorist is set in the northern part of Uttar Pradesh, India around 1990 in a fictional town of Moazzamabad. The town speaks of alienation of the Muslim community and the people who live in it. The story is about a guy called Jamal who becomes a terrorist after stabbing a police inspector and is in the process, beaten to death. Before he breathes his last, he mouths the words, “My name is Jimmy the Terrorist” and that is where the story begins. Journalists throng in from every part of the country (I liked the way media was thrashed in the book to some extent. It also reminded me of Peepli Live) wanting to gnaw on every piece of news they can obtain.

The story then moves forward in backwards talking about Jimmy’s life and what shaped him to become the person that he was before he died. It also talks about his father Rafiq, their circumstances, the marginalization faced by the society, the bringing down of a mosque in Ayodhya, to how people are treated in a country that is supposed to be a democratic one.

The idea and what the book represents is simple: Religion is not the answer to our problems – be it any religion and it can never be.  The book revolves around a small town and its issues and how everything is defined by politics and religion. Human sentiment and emotions in such times seems to have taken a walk and quite literally at that.

Jimmy did have a life before he died and no one wanted to know about it till his death was reported. Jimmy the Terrorist is a story of today’s India and how it is pockmarked with various troubles – from communalism to riots to its own agenda set by different people separately. Jimmy is an outlier in the society – may be there aren’t many of his kind, and yet they exist or are made to exist. Democracy speaks for the majority and not the minority and may be that is a concern. We are still living with the hangover of partition and that needs to end.

I found this book to be a fascinating insight into the household of Queen Victoria. It’s quite incredible that a hundred years ago, a British Queen befriended an Indian Muslim, not only that, but she learnt to read, write and yes speak Urdu. It really changed my opinion of the queen and showed that she was in fact a very compassionate woman who did not hold any bigotry towards Indians or indeed Muslims.

For this insight alone, I think the book is worth it, it’s scarcely plausible now to imagine a British Muslim as an aide to the prime minister/queen; this book captures what it was to be in her household. The unspoken parallels of his association with a British Muslim intellectual of the time (Rafiuddin) and the British establishment’s belief that he might be a malcontent when in fact he stated Britain might be a positive force in India are quite amusing when compared with this day and age. Now too, Muslims are apt to be tarred and feathered merely for meeting other Muslims, who might not even be radical, just perceived to be so. It seems some things just don’t change.

I would have liked the book to be a bit longer and discuss more of what happened to Abdul Karim after Queen Victoria passed away, there are suggestions that Abdul Karim grew pompous in his old age, I would like to have seen that expanded, but like another review stated, it allows people draw their own conclusions.

After all, class and status are so utterly artificial, when we die, people remember us for our actions, not the wealth we accumulated. I now remember Abdul Karim as the man who taught Queen Victoria Urdu, and care little for the man who sought to leave a cushy life in Agra in his retirement.