Alright, not many of you must be aware of a great book waiting to be picked up from the shelves of any bookstore and it is called “Beautiful from this Angle” by Maha Khan Phillips published by Penguin. I read the book in almost one sitting (review to follow later) and as usual wanted to know more from the author. So here goes another interview: 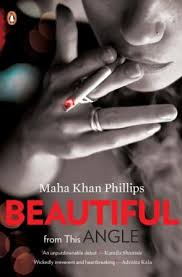 What prompted you to write this book? What brought about the choosing of the title?

I wrote Beautiful from this Angle as part of an MA degree in novel writing that I took at City University in London. You had to complete a novel in order to graduate. This novel took shape slowly. When I started out, I only knew that I wanted to look at some of the issues around the media and its portrayal of Pakistan, and of Islam, in a post 9/11 world. I realised also that I was tired of this perception that women in Islamic countries are either all victims, or powerless in some way. So I thought it would be fun to turn the idea of exploitation on its head, and have female characters that were adept at exploiting other women, as well as a gullible media.

I wish I could say some great decision-making went into the title, but it didn’t. It was a line from the book that was picked out in haste when I did a reading while still a student. I never expected it to stick, but I like it!

There are a lot of issues you touch on in the book. How come this melting pot of issues?

I really don’t know, except to say when you start writing about Pakistan, the issues just come out! It is such a complex place, with so many challenges to deal with on so many levels. And still, despite it all, a really beautiful and extraordinary place. I guess I must have been thinking about that as I wrote the book, but it wasn’t a conscious decision to bring together a melting pot of issues.

From a children’s book to a satire on Pakistani culture, how did the change come about?

And next, I hope to write a thriller! The children’s book was just something I did for fun, for my family (the characters in the book are my nephews) which then got picked up. But I really like the idea of writing across genres and trying new things out.

Is there any other children’s book in the pipeline?

I hope so, although as I said, I’m sort of working on a thriller right now. I don’t know what will come out of it – its early days. But let’s see.

Authors who have inspired you along the way?

I read everything, from pure trash to pure genius. I love David Mitchell, and I always wanted to be Margaret Atwood when I grew up! But my favourite book is Jane Austen’s Emma – now there’s a delusional and hilarious character. At the moment though, I have to say I am finding Pakistani writing to be really inspirational. I thought Mohammad Hanif’s A Case of Exploding Mangoes was beyond brilliant, and extremely funny. Nadeem Aslam’s writing is so accomplished and really impressive, and Kamila Shamsie’s Burnt Shadows… well, that is really in a league of its own. Burnt Shadows continued to upset me long after I’d finished reading it, and I think if a book can have that kind of power, then the author has really achieved something.

Someone who appears to be having trouble defining herself. Has anyone ever answered this question seriously?

At the moment, it has to be the Tea Party Movement in the US. It’s difficult to believe these people really exist outside of literature.

The major misconception that the book sets to break right at the beginning is women’s oppression in Islamic countries, which is not the case. Your sense of belief on this please.

This touches on your first question. I haven’t had experience of all Islamic countries, of course, but in Pakistan, I feel that violence against women is institutionalised, and religion is a convenient tool to keep it that way. Unless Pakistan can deal with the problem of structural violence, we will struggle to move forward. Because often, women are the perpetuators of this violence as well, not only the victims. We need strong, independent institutions and a civil society and a judiciary that works. We need education. Let’s not blame religion entirely when the whole system is failing.

And also, I’m very cynical about how these stories about women’s oppression are being marketed, as you can probably tell from the novel!

What role does religion play in your life?

An important, and personal one.

I just finished The Slap, by Christos Tsiolkas. It really made me think, particularly as the mother of a young boy…

Maha as a writer…

Is having lots of fun!